Why don't the forces of Thranduil and Dain aid Gondor in the Battle of the Pelennor Fields? [duplicate]

It seems, that in The Hobbit movie (Battle of Five Armies), Thranduil leads a impressive force of Mirkwood elves to reclaim his treasure in Lonely Mountain, but he doesn't help in the Pelennor Fields battle. Heres his army in the Hobbit movie: 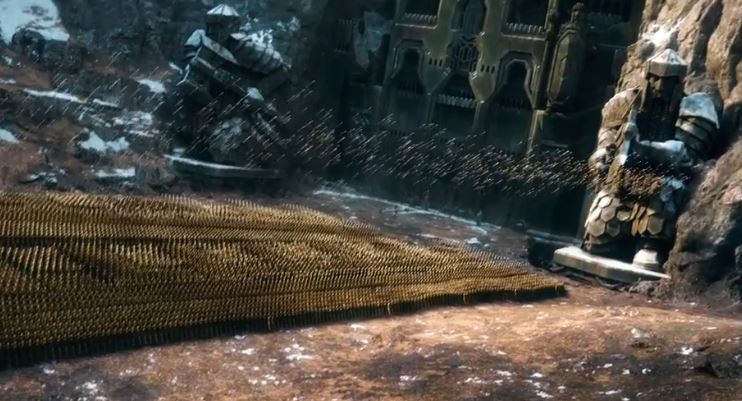 My question is why didn't these Elves and Dwarves help Gondor in the Battle of the Pelennor fields? After 60 long years, maybe their forces would have been built up to counter the Sauron-threat..? I have not read the books in a long time, so I cannot seem to think of an answer.

"War already marches on their own lands"

Answered by Legolas when posed the question by Gimli:

'The Lady of the Wood! She reads many hearts and desires. Now why did not we wish for some of our own kinsfolk, Legolas?'

Legolas stood before the gate and turned his bright eyes away north and east, and his fair face was troubled. 'I do not think that any would come,' he answered. 'They have no need to ride to war; war already marches on their own lands.'

The Lord of the Rings: The Return of the King, Book V, Chapter II; The Passing of the Grey Company

The host of Thranduil and Dwarves of Erebor (and arguably Men of Dale as well) already had their own problems to deal with. You're forgetting that Sauron also sent a Northern army to the Kingdoms of the North. Sauron could still send some of his armies to the North, even if his main one was concentrated on the South. To answer the part on Dain (and King Brand):

In the late summer of that same year (2941) Gandalf had at last prevailed upon Saruman and the White Council to attack Dol Guldur, and Sauron retreated and went to Mordor, there to be secure, as he thought, from all his enemies. So it was that when the War came at last the main assault was turned southwards; yet even so with his far-stretched right hand Sauron might have done great evil in the North, if King Dain and King Brand had not stood in his path. Even as Gandalf said afterwards to Frodo and Gimli, when they dwelt together for a time in Minas Tirith. Not long before news had come to Gondor of events far away.

'I grieved at the fall of Thorin,' said Gandalf; 'and now we hear that Dain has fallen, fighting in Dale again, even while we fought here. I should call that a heavy loss, if it was not a wonder rather that in his great age he could still wield his axe as mightily as they say that he did, standing over the body of King Brand before the Gate of Erebor until the darkness fell.

'Yet things might have gone far otherwise and far worse. When you think of the great Battle of the Pelennor, do not forget the battles in Dale and the valour of Durin's Folk. Think of what might have been. Dragon-fire and savage swords in Eriador, night in Rivendell. There might be no Queen in Gondor. We might now hope to return from the victory here only to ruin and ash. But that has been averted because I met Thorin Oakenshield one evening on the edge of spring in Bree. A chance-meeting, as we say in Middle-earth.'

The Lord of the Rings: The Return of the King, Book VI, Appendix A; Chapter III; Durin's Folk

In the North also there had been war and evil. The realm of Thranduil was invaded, and there was long battle under the trees and great ruin of fire; but in the end Thranduil had the victory.

At the same time as the great armies besieged Minas Tirith a host of the allies of Sauron that had long threatened the borders of King Brand crossed the River Carnen, and Brand was driven back to Dale. There he had the aid of the Dwarves of Erebor; and there was a great battle at the Mountain's feet It lasted three days, but in the end both King Brand and King Dain Ironfoot were slain, and the Easterlings had the victory. But they could not take the Gate, and many, both Dwarves and Men, took refuge in Erebor, and there withstood a siege.

When news came of the great victories in the South, then Sauron's northern army was filled with dismay; and the besieged came forth and routed them, and the remnant fled into the East and troubled Dale no more.

The Lord of the Rings: The Return of the King, Book VI, Appendix B; The Tale of Years (Chronology of the Westlands)

The armies of Thranduil and Dain had no need to come to the Battle of the Pelennor Fields owing to the fact that "war already marches on their lands", which would mean that they were too preoccupied to send aid to Gondor.

It is also worth noting that the Northern Kingdoms are at least 600 miles away from Gondor. That's far. It'll have took a long time for the armies to even reach Gondor, and by that time Minas Tirith would be taken over. Not only that: why would you ride 600 miles to defend another person's city, when your own is being attacked? 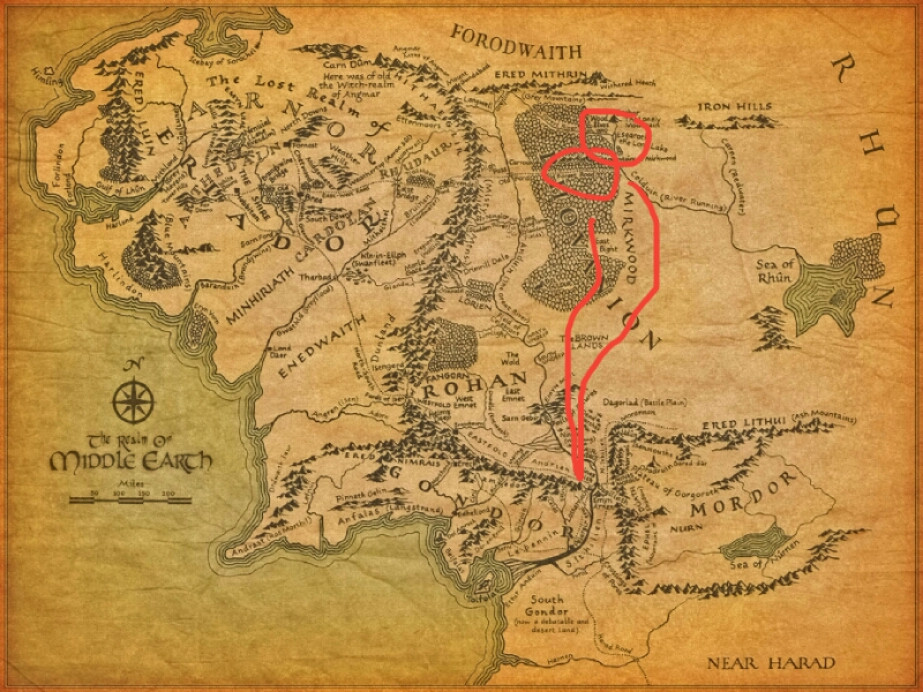 The host of Eorl came to the aid of Gondor back in the rule of the Steward Cirion. He started off in the North and reached Gondor by riding on horseback.

The Chronicle of Cirion and Eorl begins only with the first meeting of Cirion, Steward of Gondor, and Eorl, Lord of the Eotheod, after the Battle of the Field of Celebrant was over and the invaders of Gondor destroyed. But there were lays and legends of the great ride of the Rohirrim from the North both in Rohan and Gondor.

Unfinished Tales, Part Three: The Third Age, Chapter II, Part I; The Northmen and the Wainriders

We don't know if Mirkwood or Erebor housed enough horses, but it would be really tiring to walk 600 miles, and don't forget you'd still have to fight a battle.

The Battle of Pelennor Fields was not the only battle of the War of the Ring. It was the major battle of the war because Mordor's main war effort was focused against Gondor.

In the northern theatre of the war (which had spread far across Middle-earth) Sauron's primary objective was to use the forces at his primary base of operations in the areas, Dol Guldur in southern Mirkwood, to defeat Lothlórien, then pass the Misty Mountains (attacking Rivendell), and then take Rohan and Gondor. However, the orcs at Dol Guldur had to deal with the threat of Thranduil of the Woodland Realm, and thus split their forces between the attack on Lothlórien and the one on the Woodland Realm.

Sauron wanted to use his dark Easterling allies in a joint attack with the Orcs from Dol Guldur on the Woodland Realm, and then have this victorious army link up with the other ones attacking Lothlórien and defeat it. However, unfortunately for Sauron a strong Dwarf nation now existed at the Lonely Mountain thanks to the efforts of Gandalf, as well as the Dwarves of the Iron Hills and allied Men of Dale. Mordor's Easterling allies were tied up fighting the Dwarves of Erebor and Men of Dale, and never linked up with the Mordor forces assaulting the Woodland Realm, which in turn could not link up with those attacking Lothlórien, and the line held.

Besides Gondor and the Northern Theatre, there were other theatres of the war.

I don't consider the Battle of Bywater in the Shire to be a separate theatre since that event occurred weeks (months?) after all the other battles and did not really contribute to the main war efforts.

In the end, each of Sauron's forces were defeated separately and never did link up with each other as planned.

The book focuses mostly on the battles in the Rohan and Gondor theatres of war, but does mention other battles and theaters in passing. (See quotes from the book in Voronwë's answer.)

Not the answer you're looking for? Browse other questions tagged tolkiens-legendarium the-lord-of-the-rings movie or ask your own question.

36
What are the main reasons the elves did not show up in force to defeat Sauron?
9
What were the other 8 Nazgul doing while the Witch-King weakened Arnor?

67
Who was the fifth army in The Hobbit: The Battle of the Five Armies movie?
5
Why did Dáin hold half of his forces back in the Battle of the Five Armies?
24
What did Haldir mean by Elves not having dealings with Dwarves since the Dark Days even though they fought together in The Hobbit?
5
Why did Thranduil bring an army to Erebor?
1
In The Hobbit, what was the original purpose of Sauron's army?
22
What are the advantages of breeding Uruk-hai for Saruman?
11
Thorin's imprisonment “set right”