Did they have all the actors lined up for Wonder Woman at the time?

Is the photo identical or was it subtly modified between the two movies?

Was the scene meticulously recreated for Wonder Woman, or was set already constructed at the earlier time, or were the props and scenery stored and reused?

Yes, it's (probably) the same photo.

According to this new article, the photo was the first thing done:

“That was the first thing that we shot, before we’d even shot a scene [for Wonder Woman] we shot that photograph,” actor Ewen Bremner, who plays Charlie, told to Yahoo Movies.

However, the scene where the photo is "taken" in Wonder Woman had to be recreated later, based on that photo:

“It meant that when we eventually got around to shooting the scene that the [photograph] is from, we had to really painstakingly recreate it,” Bremner continued. “Because we [took the photo] against a half-built set, in a way sets were still being built at that point. So by the time we came around to filming that scene, probably around five months later, the sets were much more developed. So we had to find a way to recreate the exact same image after half a year had gone by.”

Once the photo was created for Wonder Woman, it was transferred over to the BvS team. The screen Ben Affleck would have been staring at could easily have had the contents changed in post.

That master photo seems to be used for all scenes and materials that need it, such Batman v Superman: Dawn of Justice, The Art of the Film. That book was published 2 days after the BvS was released. (If you look at the details around the edges, the photo in the book seems to more closely match the version in Wonder Woman than the one in BvS):

The photo itself was taken in November 2015. The live action scene recreating the photo was likely filmed in December of 2015 when filming was in Lower Halstow, Kent, England.

Seen here is the "original" physical version used at the beginning of Wonder Woman, and it appears to be identical in terms of actor positioning and angle.

As you can see, the photo is mostly the same. Bruce's file seems to be a cropped version of the full photo, and it has a different tint and level of contrast (probably from some sort of enhancement).

The "live" color version floating about is pretty close to the original, but they're at obviously different angles. Although, the interview with Bremner now makes it clear that it's not exactly the same set, but a recreation based on the photo. 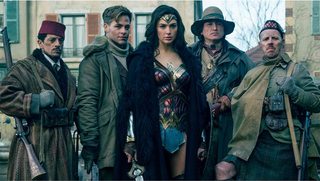 While I still have no hard evidence, it certainly appears that a single master photo was used, but it was cropped and altered for the on-screen appearance in BvS. Rather than using a slightly different version of the photo, based on the full production filming, it seems that Wonder Woman kept the original pre-filming version for the screen.

The black and white photo used for BvS and Wonder Woman (WW) prologue is probably the same. The colour version and the scene in the WW movie was however recreated. This was confirmed in several interviews where the set had to be recreated 5 months after, to match the photo setting.

It meant that when we eventually got around to shooting the scene that the [photograph] is from, we had to really painstakingly recreate it. Because we [took the photo] against a half-built set, in a way sets were still being built at that point. So by the time we came around to filming that scene, probably around five months later, the sets were much more developed. So we had to find a way to recreate the exact same image after half a year had gone by.

You will also note that in the colour version, WW sling strap on her chest (to attach the shield on her back), is stretching from her left right shoulder to the bottom right, whilst the BW picture is the other way around (it magically reversed!). Her hair is also messier in the BW picture!