I know it's not a story I'm trying to identify, but it's the closest place I can find to ask. I'm trying to remember the name of a toy I had as a kid (in the late 1980s or early 1990s), and have never heard from since (and lost somewhere along the line).

It seemed to be a Transformers/GoBots/Etc knockoff. In "vehicle-mode" it was some sort of hovercar, with bulbous sides and a larger rounded central area (sort of like a Shelby Cobra). It was painted a mid to dark blue. As far as I remember, it didn't have wheels, but it may have had small ones built into the bottom to make the toy glide over surfaces.

I don't think it had a full "robot-mode"; instead, it had a head folded face-down in the area where you'd image a cockpit would be. That head could be flipped upward, and it had a rather angry humanoid face with red eyes, which leads me to believe it was one of the bad guys. I don't recall it having a body or limbs; it seemed to be made to connect with other toys of the same line to make one large Devastator/Megazord/Voltron-type robot, but I can't say for sure. Because of this, I think the character's name was something along the lines of the "Indomitable Head" (the adjective is probably wrong, but I'm pretty sure it was "-something- Head").

It was also (mostly) die-cast metal, if I recall correctly, which made it quite heavy for its size (approx. 3-4" in length), and somewhat unusual for toys in the 90s.

Anyway, hopefully someone remembers these toys and can remind me what they were... It's been so long I wonder if I've dreamt it.

The physical description sounds like Scourge and the Sweeps, from The Transformers (1986): 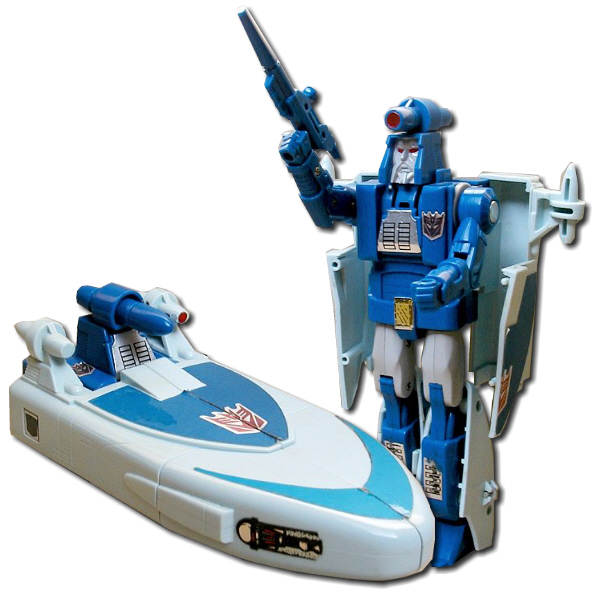 The Transformers Wiki page for Scourge (G1) shows this image and later variations of the character.