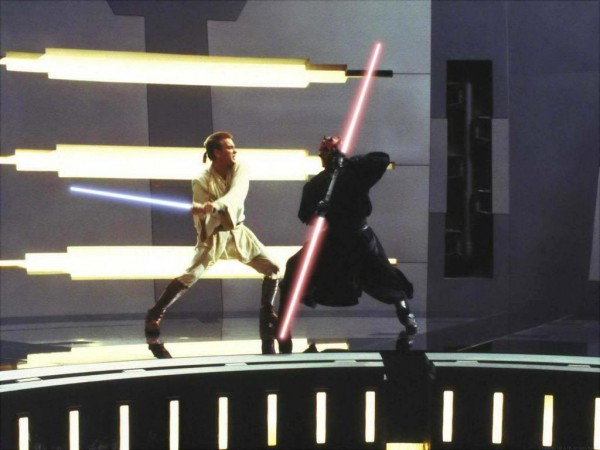 Obi-Wan cuts off the double-bladed lightsaber, thus making Maul's lightsaber into two single-bladed sabers. He is full of anger because of his master's death at the hands of the Sith Lord. Notice that Obi Wan is attacking Maul rapidly. My question is why didn't Obi-Wan cut off or slice Maul's hand? Thus making Maul incapacitated? Like what Anakin and Luke did to Tyranus and Vader, respectively.

Personally, If Darth Maul was incapacitated by Obi-Wan and taken as a prisoner, there would be advantages:

The Force didn't tell him to keep Maul alive.

Note that at the moment of the kill, Obi-Wan has surrendered his will to that of the Living Force, which presumably has a solid grudge against the Sith given all that they've done to pervert and disfigure it for their own evil ends.

At the last minute, Obi-Wan flipped himself back up onto the walkway. Using the Force, he called Qui-Gon’s lightsaber to him. The weapon slapped into his hand as he landed. The unexpected move caught the Sith Lord off guard. Smoothly, without trying, resting in the living Force, Obi-Wan swung his Master’s lightsaber. The Sith Lord tried to parry, but he could not get his weapon around in time. He screamed and fell into the melting pit. Obi-Wan felt the tremor in the Force as he died.

Obi-Wan wasn't just using the Force (as he'd been doing previously), he was open to the Force controlling his actions. As soon as he did so, he became unbeatable, but at the same time subservient to its influence over his motivations.

Eyes fixed on the Sith Lord, Obi-Wan Kenobi went deep inside himself, connecting with the Force he had worked so hard to understand. Calming himself, stilling the trembling of his heart, and banishing his anger and fear, he called upon the last of his reserves. With clarity of purpose and strength of heart, he launched himself away from the side of the pit and catapulted back toward its lip. Imbued with the power of the Force, he cleared the rim easily, somersaulting behind the Sith Lord in a single smooth, powerful motion. Even as he landed, he was drawing Qui-Gon Jinn’s fallen lightsaber to his outstretched hand.
Darth Maul whirled to confront him, shock and rage twisting his red and black face. But before he could act to save himself, Qui-Gon’s lightsaber slashed through his chest, burning him with killing fire. The stricken Sith Lord howled in pain and disbelief.

Jedi, according to Obi-Wan himself are sworn to destroy the Sith. The Jedi can kill--in defense (which is certainly what he was doing) and killing Sith that can't be turned to the light isn't considered wrong--indeed, the Jedi are meant to be the opposing force to the Sith.

The other point is that if you kill with no hatred in your heart in defense of the light side of the force, that's considered acceptable. The novelization, unlike the movie, makes it clear that Obi-Wan killed in a way that would be acceptable to the Jedi council.

As to the advantages that would have been gained, the questions that MIGHT have been answered--

Given all of this, we cannot assume that the capture of Maul, even if it were possible for Obi-Wan to do, would have resulted in the revelation that Palpatine was Sidious, and thus would have kept Anakin from turning to the Dark Side.

There's also the argument that Anakin's turn to the Dark Side would have happened no matter what because it "brought balance back to the force" or, in another interpretation, he might have gone Grey Jedi, founding a school that looked towards balance rather than pure light-side. (And honestly, even after Palpatine dies, in the books, he has all sorts of things set up ahead of time--namely a clone body for his spirit to inhabit. Who is to say what would have happened even if they had arrested him--it's possible he would have used his arrest to his advantage...)

You said it yourself, Obi-Wan was just a Padawan. His master has been killed, he almost fell to Dark Side (remember Asajj Ventress). Fueled by his emotions of grief and hate, Obi-Wan did use Dark Side to press on with attack and momentarily overcame Maul's defense. Note that Obi-Wan uses Ataru which itself is an aggressive form, and Obi-Wan is not a master of it. So, when he cut Maul's saber-staff in half, his first instinct was front flip, probably to cut down Maul from above. Yoda would probably do otherwise, but Obi-Wan was no Yoda.

Later, when he was hanging in the pit, situation was so dire he had just one slim chance to save himself. In fact, out-of-universe, scene is rather dumb, Maul just standing there like idiot and seconds before he was killing machine. Anyhow, attempting to target Maul's arm would mean pushing the luck too far, Obi-Wan just swung aiming for center of mass and hoping for the best.

Not the answer you're looking for? Browse other questions tagged star-wars obi-wan-kenobi darth-maul or ask your own question.

23
Why Didn't Darth Maul Slice Obi-Wan When he Jumped over Him?
45
Why did Qui-Gon advance against Darth Maul without Obi-Wan?
8
What started the smoke or fire behind Darth Maul?
15
Was Darth Maul deliberately leading Qui-Gon and Obi-Wan into that shaft reactor pit room?
16
Why didn't Obi-Wan use The Force?
19
Why is Darth Maul “it”?
5
Why was Obi-Wan was so confident about Count Dooku? Was he arrogant?
10
Why didn't the Jedi pursue Maul more vigorously?