The setting had Earth under a centralized administration whose orientation was toward finding the causes of and preventing a near-future 'doomsday'. There were several parallel/historical worlds, two of which were dead worlds in the future (exploring these told the 'main' world when and what happened on 'doomsday', but not how or why), the rest at intervals in the past, including the 19th century, Rome, and several worlds farther in the past at wide intervals.

There are mass deportations/evacuations of what amount to proles from the main world to the past/parallels; the main world is becoming more or less a fortress world where everyone is capable of learning/reading-with-comprehension at incredibly high speeds - a novel's worth of info in seconds or less. Travel between the worlds is via a repurposed subway train, at least in New York, where the story starts, because the screens that allow passage between times/parallels are energy-expensive, so sending a train through is the way to move the most people in the least time.

The protagonist is sent back to one of the past/parallel worlds to investigate some activities and accounting that has made the government suspicious. In the process, he gets into quite a bit of trouble, breaks up a slavery ring, and ultimately discovers a likely cause of 'doomsday', whose revelation triggers the downfall of the controlling government, and the creation of a new federalist one.

The cover pic I remember was mostly blue and had a lion-like beast and a NYC subway train (R-40 sloped ends - I used to be a subway railfan).

The Empire of Time by Crawford Kilian, first book in his Chronoplane Wars series, also the answer to the old question ID a novel in which the protagonist was sent back in time to pull forward individuals for training.

Jerry Pierce was the Intertemporal Agency's most experienced operative, a seasoned time-traveler on the old subway train that whisked him back and forth through the ages. He'd already altered history by directing the Turkish conquest of Constantinople four centuries ahead of schedule and garrotting an obscure Mongol chief before the man became a problem. But his biggest difficulty lay ahead of him.

Seventy-four years ahead, to be exact.

Somehow, someway—nuclear war, alien attack, no one really knew—Earth was going to be destroyed and left a lifeless cinder. It was every Intertemporal agent's goal to find out how and to prevent disaster. But suddenly the problem had become Pierce's special assignment. And just as suddenly, the man for all ages had been mentally blocked from knowing what was going on. What he didn't know was that he was now programmed to kill—and was being pushed to the end of the world . . .

Travel between the worlds is via a repurposed subway train, at least in New York, where the story starts

The intertemporal shuttle between Earth/2015 and Beulah/1804 was an old subway train. For decades, its three cars had carried passengers on the old IRT line up and down Manhattan; now they sat on a hundred-meter strip of track in a tunnel in Flushing, on the basement level of the New York Transferpoint Building. Twice every hour, the I-Screen was turned on at the end of the tunnel, and the three cars rumbled through the screen toward an identical tunnel on Beulah. The cars were painted in Agency blue and white, and defaced by emigrants' graffiti, scratched, chalked, inked, and sprayed on every surface: LOIS & BILL, JAN. 27, 2015. BACKSLIDERS RULE. AID IS NO HELP. 1804 OR BUST. The Agency for Intertemporal Development did not care; these were, after all, the parting shots of people who would no longer be a nuisance.

Jerry Pierce was one of the few passengers coming uptime on the shuttle, but over a hundred people were waiting on the shuttle platform for the trip back. Some were emigrants, dressed in blue-and-white Agency-issue fatigues and clutching their shabby luggage. Most, however, were Trainables on official business: civil servants, technicians, and scholars. Some ostentatiously wore flickreaders pushed up on their foreheads, like sunglasses, as if their civilian clothes and attaché cases were not enough to proclaim their privileged status.

The shuttle came through the Screen and screeched to a halt. Pierce was the first one off. He announced nothing. In his dusty buckle shoes, knee breeches, and tailcoat, he looked like a visiting endochronic—possibly a senior bureaucrat in President Jefferson's administration, traveling to the twenty-first century to beg favors from the Agency. He ignored the Trainables' patronizing smiles—and the emigrants' sullen stares—as he handed his suitcase to a porter and shot his cuff, flashing his wrist ID.

The cover pic I remember was mostly blue and had a lion-like beast and a NYC subway train (R-40 sloped ends - I used to be a subway railfan). 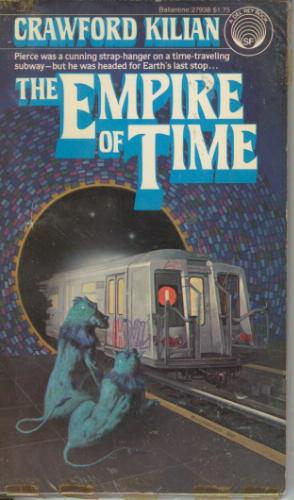 Not the answer you're looking for? Browse other questions tagged story-identification novel time-travel parallel-universe or ask your own question.

10
Do parallel realities take precedence over time travel in the Star Trek Universe?
6
Man and woman travelling through parallel universe?
4
Looking for a book featuring a soldier/marine travelling to a different time/universe
10
What's the sci-fi collection that includes stories about Ball Inc, a James Bond-type agent, and a level 20 domain in the Congo?
17
First book of a series: boy disappears from his life, becomes time travelling agent
14
Zombie Outbreak movie with a cure
19
Short story about protagonist and others 'time-travelling' forward as statues