Is the Joker bluffing in these instances?

In The Dark Knight, the Joker talks to Two Face while they are inside the Gotham General Hospital.

The Joker explains that he didn't plan the kidnapping of Rachel and Harvey, since he is clearly a person who does not make plans. Is this a lie and why would he lie about it?

I really doubt that the Joker didn't plan out the kidnappings of Harvey and Rachel.

Further, add to that the fact he gave the wrong addresses of their whereabouts, interchanging them in fact, when asked by the Batman. (Before you try to correct me, yes, The Batman)

Another interesting thing about the encounter that occurred between Joker and Harvey at the Hospital, specifically (like you asked) about when Joker apparently gives the pistol in Harvey's hands and supposedly leaves his own fate upon a coin toss. Refer the following image:

edit: I found that (this part of the answer) has already been answered here:

Why did the Joker take the risk of placing a gun in Harvey Dent's hand? 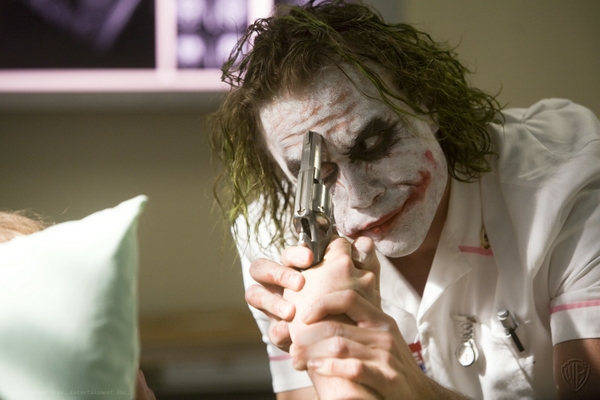 When Harvey holds the Joker at gunpoint in the hospital scene, you can see that the Joker is actually holding the revolver’s hammer with his finger, thus preventing the shot in case Harvey's coin lands on “bad” side.

Continuing, I doubt the Joker left anything to chance. The idea that he lied to Harvey to bring out the madness within him, isn't so far-fetched after all.

First off, the movie is called just Dark Knight. It's second in the trilogy: Batman Begins, Dark Knight and Dark Knight Rises.

Second: In comics, morality of Harvey Dent is quite a big deal (see The Long Halloween, The Dark Victory and My Own Worst Enemy). Harvey was a prominent aid to Batman because he could put criminals behind bars for good. But if he killed Joker, he would irreversibly turn to dark side and Batman would lose one of his greatest allies (which happened anyways, but in more subtle way so his public image was not affected).

Joker is insane, but also intelligent, and there's one thing he always wanted to prove - his "one bad day can turn the man insane" motto (The Killing Joke). I believe he planned the kidnapping ahead, but decided for Harvey and Rachel rather lately. He also improvised his visit to hospital, but the gun part was well thought, and I am sure the gun was loaded.

Nolan trilogy is heavily based on comics and I am pretty sure Nolan was aware of stories I listed here (with the exception of My Own Worst Enemy, that one is couple of months old).

Not the answer you're looking for? Browse other questions tagged dc batman nolan-batman-trilogy the-joker or ask your own question.

27
Did the Joker mislead Batman, or was the Joker himself ignorant of the facts?
11
Why didn't Batman tell Harvey Dent that he tried to rescue Rachel?
12
How much older than Bruce Wayne is the Joker supposed to be?
13
Is Alfred the moral conscience of Bruce Wayne/Batman?
16
Did the Joker ever refer to himself as the Joker?
18
Why does the real identity of the Joker matter?
3
Batman 1966 - The Joker is Wild - who are the actors behind the busts?
49
Has Batman ever said he hates the Joker?
7
What does the Joker say in Tim Burton's Batman (1989)?