Looking for the name of a graphic novel, scifi, read in mid 80s

I remember reading a graphic novel around the same time frame Elfquest was published. There was a new experimental ship that was stolen/hijacked, that when it went into FTL space was white and stars were black. About anything else I remember was an Earth officer, relieving a bridge officer for a break, then convincing the ship to crash itself into a planetary headquarters. That's all I can remember, would like to find it again.

This is Lightrunner. Not a very good story but it was interesting when I was a kid. It was published in the correct time frame and involves the theft of an experimental ship. The story concludes with the scene described in the OP about the ship being scuttled into a bunch of other experimental ships.

In the future, capitalism runs the universe in the form of planetary Corprostates held together by a web of trade undertaken by tachyon-driven solar sailing ships plying the perilous routes of the “Star Stream”. The Empyrean Alliance is a tenuous association of Free States, restive, politically insecure and greatly dependent on the trustworthy valour of the apolitical Empyrforce – a Navy-style peacekeeping/police militia.

The tale begins with young Burne Garrett, son of a legendary Empyrforce hero, who failed to make the grade and scrubbed out of his military training. Garrett is a pathetic disappointment to himself and everybody else. Now a lowly PR hack he is filming the initial tests of a radical new type of faster than light starship – The Stream Breaker – when calamity comes calling.

The new super-vessel suddenly comes to eerie life and takes off with him aboard, vanishing into the unknown, and the unwitting fool is suddenly Public Enemy #1! Framed, lost and desperate Garrett is soon plunged deep into the seedy underbelly of civilisation, a pawn of pirates and raiders until he is adopted by the spoiled, rich wild-child Lanie of Abul Sara (think Paris Hilton in lace-up high heel thigh-boots with a ray-gun… and now stop thinking of that because that’s not how she looks but what she’s like…). 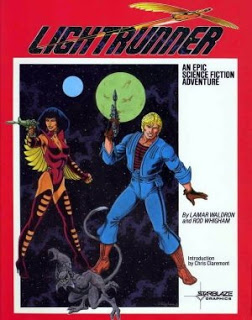 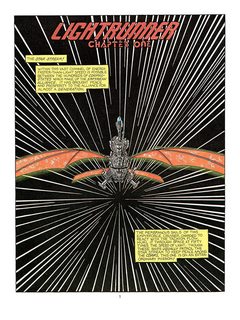 It was published in 1983 by The Donning Company Publishers, who also put out a book collecting the first chapters of Elfquest.

Not the answer you're looking for? Browse other questions tagged story-identification comics novel or ask your own question.

19
Trying to remember the title of a fantasy teenage aimed novel I read in the mid-1990s
11
Story of a man who is sole survivor of a crash landing on a planet with cities from extinct alien race
17
Late 90's or early 00's graphic novel with a girl and an airship
7
Graphic novel about a fake city symbolized by a Drosera, cartographer crossing the desert in a triple-decker airplane
12
Help finding a sci-fi book with a small space ship
4
Original IP comic based on unused Hulk story, centers around domestic abuse?