What were Batman's contingency plans to immobilize the Justice League?

In Justice League: Doom, Batman has developed contingency plans for every member of the Justice League so that they could be incapacitated if ever necessary. However, Vandal Savage gets a hold of them and alters most of them to be lethal.

* Superman is shot by a Kryptonite bullet
* Wonder Woman is injected with nano-machines that cause her to hallucinate and continuously fight the Cheetah until she dies from exhaustion.
* The Flash has a bomb stuck to his arm with a timer. He can run in order to prevent the timer from completing, but obviously cannot stop.
* The Martian Manhunter is injected with a chemical that reacts with his physiology in a way that causes him to be consumed in flames that cannot be doused.
* Green Lantern is lured into a collapsing mine and is affected by a deception (and some chemical assistance) into giving up all hope and renouncing his power ring while he stews in depression.

Now, Batman has his own issues to deal with while all of this is happening, but he did not add himself to his list of contingency plans.

In this clip, Batman explicitly says his plans were to immobilize members of the League. Since we only see the lethal alterations of the plan that Savage tried to execute, what was Batman's plan to immobilize the League members and not kill them?

There's a Secret Files and Origins issue (not certain which one) containing Batman's files on some of the JLA.

Flash is to be incapacitated by a specially made vibrating bullet, delivered to the back of his neck, which causes him to have seizures at light speed. Once properly contained, the bullet can be removed.

Martian Manhunter is to be incapacitated in the same way as Savage's plan, by setting him on fire via a magnesium-based chemical reaction in his skin. I expect Batman's version is less potent and would simply neutralise MM's abilities without outright killing him.

The Atom is to be rendered helpless via sudden induced shrinking, leaving him so small that he can't realistically accomplish anything.

Steel is to be rendered powerless via jamming of his hammer controls.

Firestorm is to be rendered powerless by splitting him back up into the two people that make him via bombardment from a linear particle accelerator.

Green Arrow is to have his vast fortune cut off and his personal life messed with to the point where he can't really function as Green Arrow properly.

Black Canary and Zatana are to be injected with a toxin that constricts the larynx, limiting (but not completely preventing) their breathing. This renders them immobile.

Batman does not consider Rocket Red to be a threat due to the age and manufacturer of his armour.

Wonder Woman is also to be defeated in the same way as Savage's plan, by inducing a hallucination that causes her to see Cheetah. Her Amazonian fighting spirit will make her fight until she is too tried to continue. Batman possibly underestimated how long she would fight for and assumed that she'd pass out from exhaustion before any permanent physical damage occurred.

Green Lantern is to be rendered powerless by making him temporarily blind via a post-hypnotic suggestion. While active, this suggestion has GL subconsciously use the ring to blind himself, preventing him from forming projections. Once contained, both the ring and hypontic suggestion can be removed, at which point he is powerless.

Plastic Man is to be frozen with liquid nitrogen and shattered to immobilise him. Once he is securely contained, Flash is to reassemble him, at which point he will reconstitute.

Aquaman is to be rendered helpless via a fear-inducing toxin that makes him afraid of water. Lack of water will incapacitate him in fairly short order. I assume that once securely contained, the fear will be removed and just enough water will be supplied to keep him alive.

While not present in these images, Batman's plan for Superman is to expose him to "Red Kryptonite", an artificial form of Kryptonite designed and created by Batman as a result of exposing Green Kryptonite to radiation, which makes Supes' skin transparent. Without the natural barrier of skin to filter out our yellow sun's rays, Supes starts to feel intense pain due to sensory overload. This incapacitates Superman without killing him.

Batman does not appar to have a plan for himself, but it is presumed that if he ever went rogue, he would rely on the remainder of the JLA to take him down. 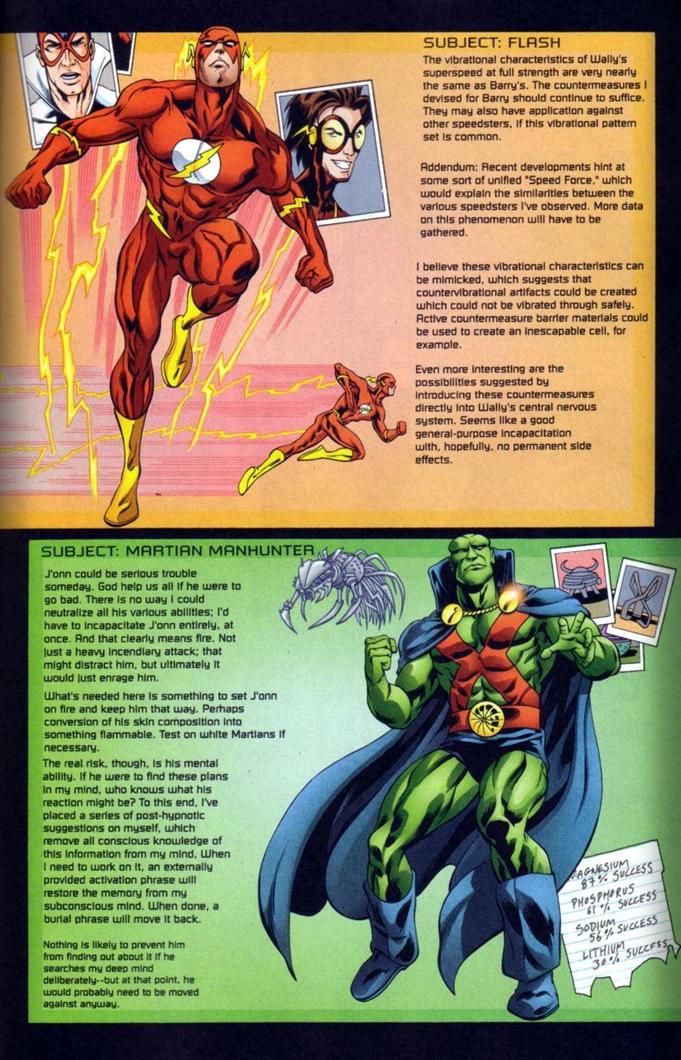 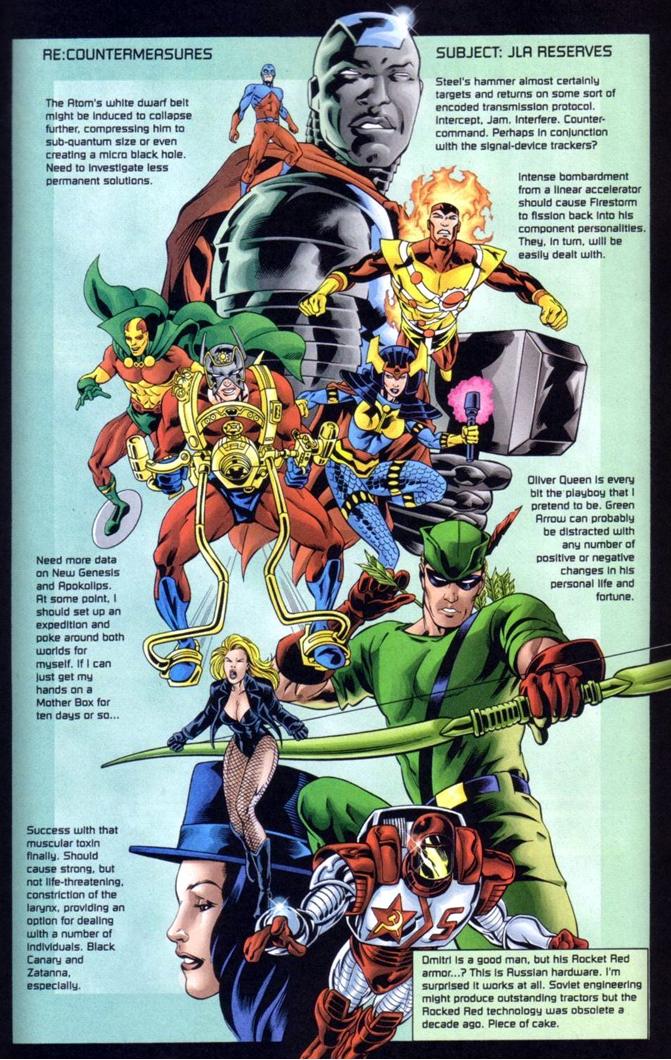 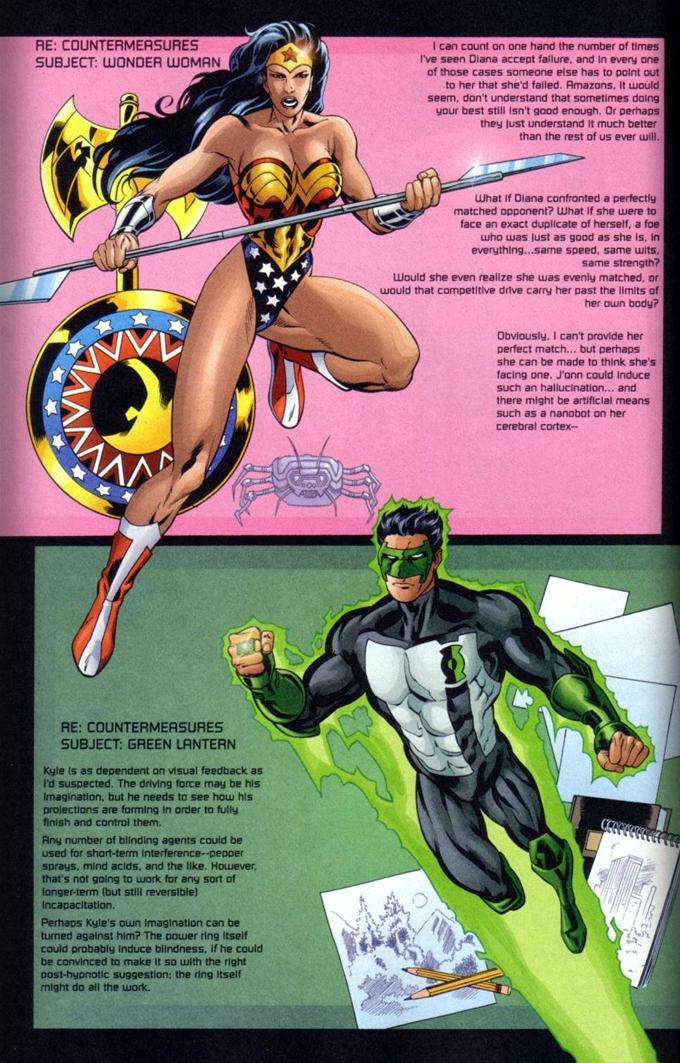 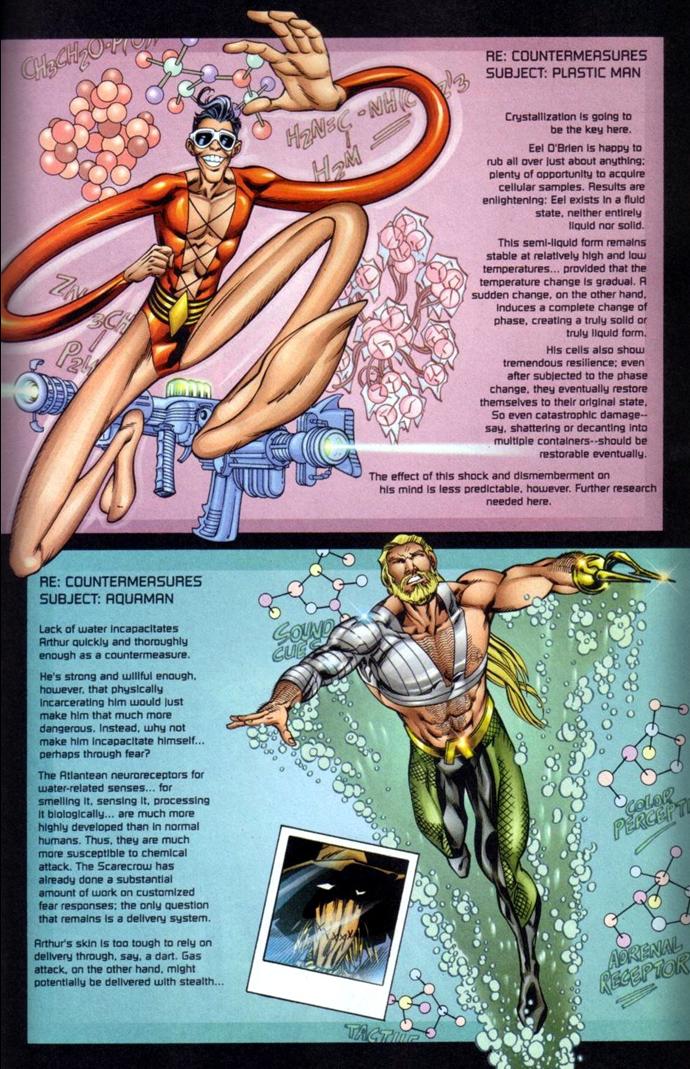 Not the answer you're looking for? Browse other questions tagged dc justice-league-doom or ask your own question.