I'm looking to identify a story about a young woman who needs to go to a Big Baddie's castle to retrieve something, a book, I think.

Along the way she meets a young man who at first she doesn't get along with, but who ends up being a love interest.

She also discovers how to use magic, which she uses by traveling down a "web" in her mind. At the end of the book, her fight with the Big Baddie leaves her "web" burned out.

Some more details, I believe the book has a scene where the Main Character takes care of her leather boots and bag by oiling them.

It's a pretty grounded story. There's not much more to it than the woman going on her quest to the tower, arriving, beating the Baddie and getting the object she was questing for. It did end in a way that made me think there'd be sequels.

I know that's not a ton of info to go off of, and I may have mixed some details from another story, but I appreciate your help. It's a book I think my wife would really enjoy.

This might be a bit of a leap, because I don't remember how the magic system worked, but maybe First Truth by Dawn Cook? It involves a young girl traveling to the Hold to meet a member of the Masters, the magicians of the universe. She does meet a young bardic boy, who accompanies her. The one remaining Master is evil, but teaches her to try to exploit her. I don't remember a burn-out, though. The big twist is that she turns into a dragon. 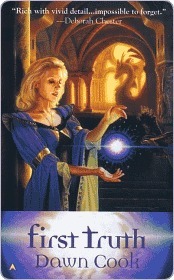 It is indeed the first book of a series (side note, despite the cover, the girl is dark-skinned and dark-haired. It's actually a minor plot point, because her race is distrusted by the lowlanders).

You can find the first page on the author's site here.

Perhaps The Web of Wizardry by Juanita Coulson? It was published in 1978, so earlier than you remember, but the sorceress does cast spells by traversing webs in her mind. I don't recall the other parts of the plot well enough to say for sure that this is it, though.

5
Looking for a short story where there are murders taking place with magic
14
Looking for a Harry Potter like story with female lead
11
Fantasy book series with a male human protagonist and elves with magic tattoos
9
Fantasy book series about persecuted people with elemental magic powers
11
80s/90s fantasy book: female protagonist, demon-related magic, "knife"/"blade" in title...?
9
Isekai fantasy where the protagonist breaks magic
11
Novel about 'magic' on the moon where a woman loses her memory when a silver needle is inserted into her head
13
Fantasy/magic book with female protagonist and a misogynistic villain in a ringed city
23
Fantasy series where magic smells faintly of sweet almonds