Have Deadpool and Bea Arthur ever met?

I've heard and read about Deadpool's obsession with Bea Arthur, but I couldn't find anything on their relationship to each other. Have these two ever met, or has she ever shown up in person in any of his comics or other canon material?

Some follow-up questions would be exactly where, when, and why Deadpool became so enamored with Bea in the first place.

Bea Arthur and Deadpool have never met, and she has only physically appeared in one comic.

After getting into a fight with a Pizza delivery man who turns out to be The Punisher. After getting attacked with various weapons The Punisher had collected from Villains, Wade makes his way to Outlaw's place, where she helps him to recover. 'pool begins to hallucinate and se Bea Arthur instead of Outlaw (click to embiggen): 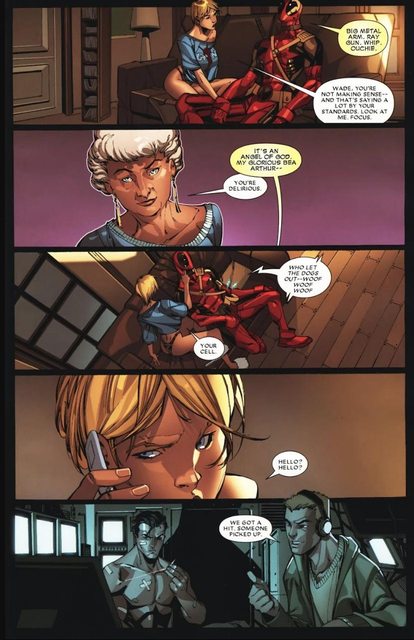 Bea Arthur has had 6 mentions in Marvel comics.

Released May 2004, the first mention of Bea Arthur comes in a Cable & Deadpool team up. Deadpool while watching TV calls her "The sexiest woman alive":

Bea Arthur gets her second mention in a Deadpool comic comes in 2009, shortly following her death, Deadpool states that nothing is more personal that Bea Arthur

Jock: Wasn't personal Deadpool
Deadpool: Aside from talking trash about the beautiful Bea Arthur, god rest her soul, it don't get more personal.

Although I couldn't find a reference to Bea Arthur, in the 2010 comic, the Marvel.wikia claims she had a mention in the comic.

In this comic released April 6th 2016, a slightly more subtle reference after Ryan Reynolds had a print of Bea Arthur on a shirt during the film Deadpool.

After being stabbed in the chest by Sabretooth and pulling out the sword, Deadpool proclaims:

Just two weeks after her last mention. Bea gets her fifth appearance in a Deadpool comic in mid-April 2014 on Deadpool's top 5 free-pass list, he name comes in at number 4, as ZomBea Arthur. The free-pass list is times he can be unfaithful to his wife, Siklah. 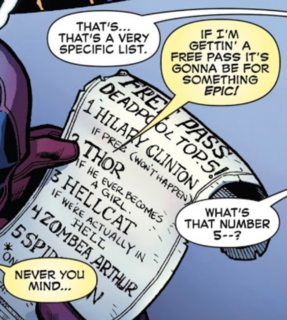 Her most recent mention comes just 14 days ago, in this timeline, Captain America has been transformed into a hydra sleeper agent, with a team of Inhumans to take him down.

In an attempt to get Deadpool to attack her, Quake pays a child to call a number and say their ordering a soda and their name is Bea Arthur:

Yeah, I'd like to place an order to go. One large soda. Any kind.
My name?
Bea Arthur.

This was confirmed as an attempt to attract Deadpool as when the Taskmaster shows up, Quake admits her plan.

This was a trap, genius. For Deadpool.

Not the answer you're looking for? Browse other questions tagged marvel comics deadpool crossovers or ask your own question.

20
Why does Deadpool always have a yellow speech bubble?
4
Have Deadpool & Thanos ever fought?
2
Does Deadpool ever fly in comics?
30
Has another character ever observed Deadpool breaking the fourth wall?
1
Has Deadpool ever had telepathy?
3
Does Deadpool ever need surgery?
2
Have Peter Parker and Peter Quill ever met each other in the comics?
10
Is the Deadpool-caused superhero disappearance ever mentioned elsewhere?
4
Does Storm have any family, i.e. are Spyke and Mij'nari canon in the main Marvel universe?
3
Comic about a young woman monster hunter