Novel centered on question of identity, man with replaced skull and hands

I'm trying to recall the title and author of a short novel which centered on a question of identity: A man has been returned from the other side (e.g., to the U.S. by Soviets back in the day, that kind of thing) with a prostethic skull, eyes, and hands. The people he's come back to aren't convinced it's really him as opposed to a spy. (This is clearly before DNA identification.) I would have read this in the 70s/80s in the U.S.; could be a UK novel, though.

Who? (1958) is a science fiction novel by American writer Algis Budrys, set during the Cold War. 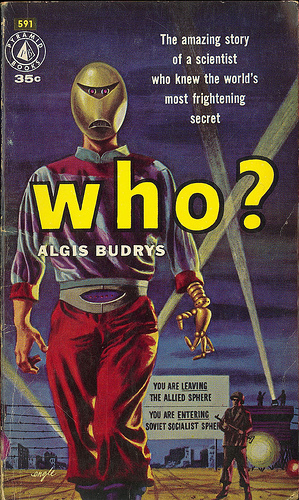 Plot according to wikipedia:

An explosion resulting from an experiment gone awry rocks an Allied research facility near the border with the Soviet Bloc. A Soviet team abducts Dr. Lucas Martino, a leading Allied physicist in charge of a secret, high-priority project called K-88. Several months later, under American pressure, the Soviet officials finally hand over an individual, claiming that he is Dr. Martino. The man has undergone extensive surgery for his injuries. He has a mechanical arm that is more advanced than any produced in the West. More importantly, his head is now a nearly featureless metal skull, a kind of extreme craniofacial prosthesis. A medical evaluation reveals that several of the man's internal organs are also artificial. His biological arm and its hand's fingerprints are identified as Martino's, but this may be the result of an arm and hand transplantation. The Allies are suspicious that the Soviets have sent them a technologically altered spy and are holding the real Martino for further interrogation.

You're looking for Who? by Algis Budrys. Published in 1958, but taking place in an alternate 1970's. The soviets abduct a scientist; Lucas Martino. Several months later, he is returned with a metal skull and mechanical arm. His biological hand has his fingerprints, but that may have been transplanted. The thrust of the the novel is determining who he is. 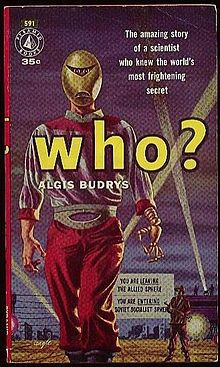 Not the answer you're looking for? Browse other questions tagged story-identification cyborg cold-war or ask your own question.

18
Sci Fi short story with aliens who only mate every 7 years
9
Novel about astronauts returning to depopulated Earth
11
Story Identification: Colonists Adapting to Alien World
6
Sci-fi novel about a world-destroying cataclysm from the 70s or earlier
17
Trying to identify a novel I read as a child about a dystopia with social classes and high-security prisons
7
Cold War-era sci story about nuclear war between US and USSR. American survivors walk to Russia to resettle?
7
Children's Ghost Stories collection from 1970s
8
Earth as Water World, invasion at climax, fought off
5
70s/80s book: Cold-war Psychic superweapons