Robot anime of the 80s

I am desperately trying to remember an anime I used to watch as a kid in the 80s.

It was about robots, I don't remember if the boy (the protagonist) could transform into a robot or he just was the pilot but the weird thing was that before starting the "robot action" a group of girls "prepared" this guy bathing and scrubbing him (the whole scene lasted a few seconds).

It is Yattodetaman, one of the Time Bokan Series (see this other question).

When Wataru Toki turns into Yattodetaman (superhero AND robot pilot), some girls from the future help him wear the super suit. Wimpy and coward before the "treatment", he is definitely more "mature" (stronger and brave) after the transformation - this is also due to the hammer to the head, super food and super fast training. The whole transformation happens inside a time-slowing beam, so it takes only 3 seconds of "real time". 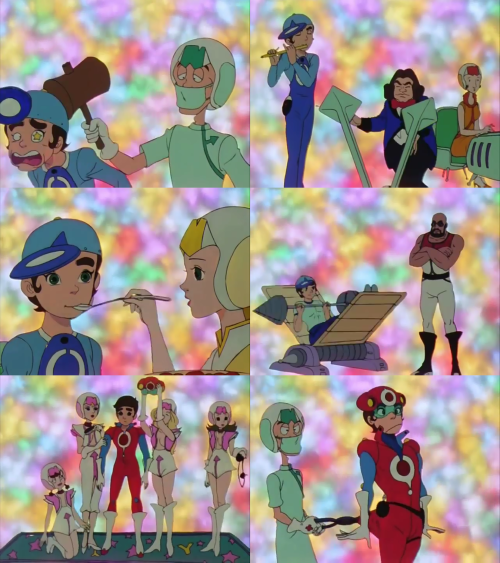 As you said in the comment, part of the transformation is visible in episode 44, but the very first episode in which the full transformation sequence appears is episode 29 (here in Italian):

The girls appear again in episode 40 (in which all characters play themselves on stage). In this case the girls undress him completely, but they don't bathe him, they just dress him as Yattodetaman.

3
Warring aliens transfer mind to transformer like robots in 80s/90s animated movie?
5
What is the name of the anime kids, mecha and fantasy series with a group of 4?
4
80s Mecha anime/cartoon about a giant spaceship that could transform into a humanoid robot form
5
80s/90s anime/cartoon with grey robot protagonist with elongated head riding a hoverboard
6
Looking for an older maybe 20 year old Mech Anime
4
'80s anime where a boy is transported back in time to the Jurassic era, and a T-Rex is speared to death by a tribe