Difference between Mondasian and usual Cybermen

Spoiler alert for someone who has not seen Doctor Who s10e11 trailer!

In the last trailer of "Doctor Who" Doctor says "Mondasian Cybermen"

I do not understand: how they are different from the usual ones, who we've already seen in the series?

Mondasian Cybermen are simply Cybermen from the planet Mondas, a twin planet of Earth where the inhabitants turned themselves into cyborgs in order to survive their planet drifting further and further away from its sun. These are the original Cybermen, and every Old Who episode involving Cybermen was about them or some faction/offshoot of them.

In New Who, most of the Cybermen we encounter were originally created by John Lumic in an alternate universe known only as "Pete's World", and they're sometimes called "Cybus Cybermen". As far as we know, they have no connection to Mondas.

Even the appearance of Mondasian Cybermen varied wildly, but when people use that term they're probably thinking of at least one of the head designs shown in this image: 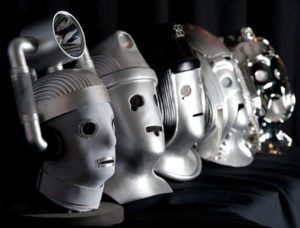 Mondas was the original home of the Cybermen, seen in only one story, The Tenth Planet. From the second televised adventure on, the Cybermen seen were from Telos, or other planets colonized by the Cybermen at some point to Mondas' destruction. The Mondasian Cybermen had a far less advanced design than other models of Cybermen, even appearing to still have biological hands. Later models and redesigns of Cybermen may be explained by various colonies developing, and perhaps later sharing, upgrades on their systems.

Mondasian Cybermen are most easily recognized by the larger headlamp-like weapon on their heads, the more human-looking hands, and the cloth-like head covering, possibly being some form of bandage, covering a more biologic face and head.

The gold weakness of the Cybermen, mentioned in the comments above, was only introduced in Revenge of the Cybermen, In that story, it was explained that gold, being non-corrosive, could be used to coat the Cybermen respiratory system, suffocating them. As time passed, that weakness changed and mutated, and started to affect their systems in increasingly catastrophic ways, with smaller amounts. It began to be more like the effect of silver on a werewolf - by the time of Nightmare in Silver, the tiny amount of gold in an amusement park ticket was enough to short out cyber-circuitry by simply placing it on the surface of the skin.

7
Are the Cybermen in “Assimilation²” Mondasian or Cybus?
8
How big a paradox is required for The Reapers to appear in Doctor Who?
8
Doomsday - How Does Pete Know
12
Why weren't people afraid of the Cybermen in “Death in Heaven”?
4
What are the similarities between The Borg and The Cybermen?
4
Why do the Cybermen coming through the rift move organically?
3
Do we know how this character is alive?
10
When in Mondas' timeline did they launch their colony ship?