Would appreciate if someone helps me with the name of the old anime I watched as a kid. The anime was released at about 80-90’s. I don’t remember the script, but one scene is stuck in my memory. The main character, blond big guy (probably he was a cyborg) with sunglasses, is fighting a robot on some construction site. The robot is not a cyborg, I mean, you can see, that it is made of metal and it is a killing machine.

Blond guy was losing until he understood, that the robot is sensitive to sound. So, the blond guy took a metal ball and hit some construction. The killer robot was confused and the blond guy destroyed it. After that, in the end, the blond guy is smoking cigarettes and you see the titles. Does anybody have any ideas, what is the name of this anime? Thank you!

Gogol is a cyborg with a visor (not blonde, he has a mohawk). 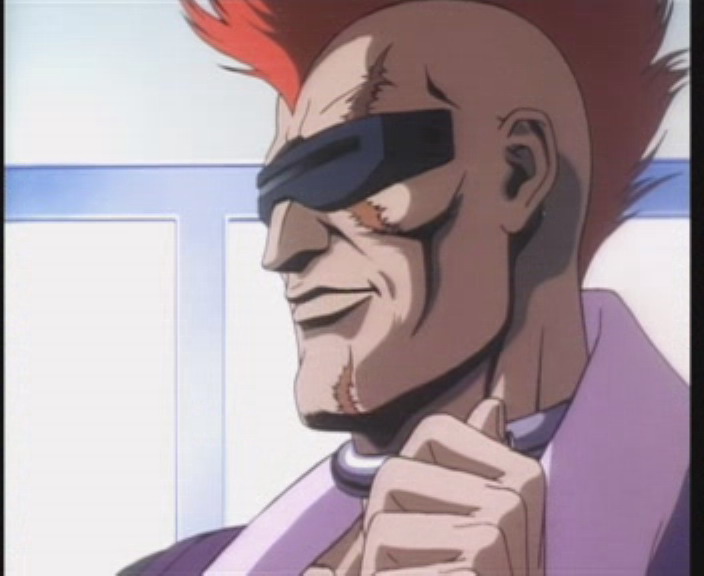 He fights against an experimental cyborg (which does look like a robot, but turns out to have a human head) on a large metal tower. The cyborg has psychic powers and is winning, but Gogol discovers it is sensitive to sound. He defeats it by smashing a metal bar onto the building. At the end Gogol collapses on the tower and it's actually his 'boss' Hasegawa who smokes a cigarette.

The scene you are thinking of (in fact the entire episode) is here.

19
Identify this short story: Malfunctioning robot destroys anything that moves, man is injured by robot, shines light on robot
8
Anime where a character works to prevent his birth
4
90s/2000s anime/cartoon with a boy, a girl, and a robot looking for seven gems to prevent the planet from blowing up
12
Robots building a bridge anime
4
An OLD anime about a boy with "demonic" powers joins with 2 others to fight aliens who use humans for genetics experiments
4
Identifying the story where the girl doesn't know that she's actually a robot until the very end
10
Animated featurette about a boy who befriends old junky, clumsy robot in a Jetsons-like future setting