If PPGs don't penetrate metal, why didn't people use armour in Babylon 5?

Phased Plasma Guns (PPGs) are used on ships because they won't penetrate ship hulls. Based on what I've seen, there doesn't seem to be much use of body armour, (metal or otherwise).

In a setting where PPGs are so common, why is no one wearing protection against them?

PPGs aren't common, which is why people don't wear body armor that often.

As the audience, we often see them, but that's because our perspective follows the staff and crew of Babylon 5 around. They are military, who have access to and are permitted to carry PPGs in the line of duty. Security carries sidearms on duty as a matter of course. Otherwise, security is about as tight as it can be for such a large station. At all entry ports to the station, there are weapons scans, and people aren't allowed to bring weapons onto the station. This can be seen in, for example, The Parliament of Dreams, where not even a ceremonial knife is allowed onto the station. Weapons have been smuggled onto the station, but they're not hugely common.

We also do see people wearing body armor when they expect to be going up against a serious threat. For example, we see them wear body armor in the episode Severed Dreams, among many others. 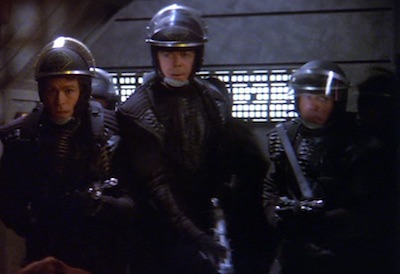 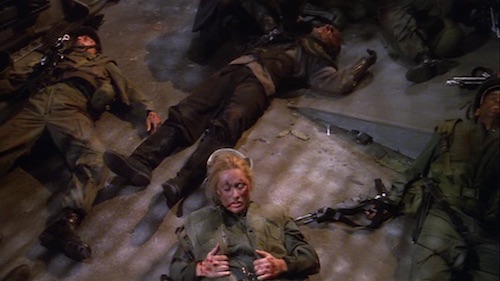 Additionally, it's not true that PPGs don't penetrate metal — they simply take longer to penetrate than a bullet. In the episode Conflict of Interest, we see PPG bursts easily go through a thin air duct, and also, after an extended bout of fire, through a bulkhead door. An explanatory quote from George Johnsen, a co-producer:

Did the PPG blasts melt through the air conditioning duct wall?

This is substantially correct. The PPG blast is extremely hot, and will melt through the plastic coating and the metal lining inside the tube. The entire energy of a PPG will not come through the tube (unless by some coincidence the exact same area is hit twice or three times), and I believe that this was propoerly portrayed in the sequence. Even if it isn't the entire energy blast, it will hurt like hell and de-mobilize an individual meat packet (person) for the bad guys to come get later. It did take a very long time to burn through the bulkhead door to allow them access to the hallway, and said door did mildly glow in the affected areas prior to melting through. The station hull is even more heat resistant.

In the very first pilot episode, The Gathering, Sinclair and Garibaldi suit up in black padded vests when going after the changeling net assassin. Garibaldi takes a PPG hit directly to the chest during the fight, which throws him backwards harshly, but otherwise he's unhurt. He hurriedly sheds the vest, because it's now on fire from the blast, and comments he's fine, armor got it.

You see these black vests and variants of them on and off throughout the series, usually only when security is expecting heavy return fire and they have time to set up with them.

If the question is more about why aren't people seen in armor all the time, well, in addition to all the reasons noted in comments (protection vs mobility, intimidation factor), constantly marching around in riot gear like you're about to be shot sets a very bad expectation of success for your space station dedicated to peace and trade.

Not the answer you're looking for? Browse other questions tagged weapon babylon-5 armor or ask your own question.

53
Why don't survivors in the Walking Dead use spears?
32
Who destroyed Babylon Stations 1-3 and why?
21
Why did Babylon 5 have so many cast changes?
9
Why is security on Babylon-5 so lax?
4
Did anybody ever use Draal's holographic system after Sheridan's announcement of Babylon-5's independence?
5
Can slugthrowers penetrate stormtrooper armour?
22
Why don't they use dragonglass sword?
23
Why do immortals not use any neck armour in Highlander (1986)?
9
Why wasn't Vader's armour made of Beskar?