Magneto has control over magnetic fields, very high strength ones, but can he apply fast moving alternating fields? If so he should be able to perform induction heating, in fact, with his power he should be able to melt virtually any metal object, including non-magnetic (ferrous) ones. In fact he can produce such powerful fields he might even be able to heat non-metallic objects this way, or boil water. Has Magneto ever done this, and if not, why not?

Magneto has done this at least once - as long as an alternate future counts. In UNCANNY AVENGERS (2012) #18, in a future where Earth's mutant population has been relocated to their own planet, he uses it while attempting to stop Havok and the Wasp (Janet Van Dyne), who are trying to go back in time to save Earth before all this happens.

How do I know this was Magneto's doing, or even that those are hot metal hands? 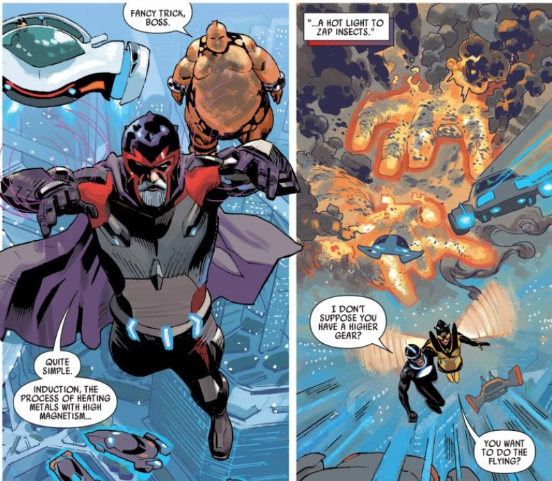 He tells us so himself.

Mind you, I make no claims that this is working anything like actual magnetic induction would; I'm just telling you what Rick Remender (writer of the comic) claims is happening.

Magneto possesses the power to control all forms of magnetism. He can shape and manipulate magnetic fields that exist naturally or artificially. It is unclear, however, whether he must draw magnetic force from outside himself (if so, then he can do so over vast distances), or whether he can also generate magnetic force from within himself. Nor is it clear whether Magneto's power is psionic or purely physiological in nature. Magneto's power is, for all practical purposes, limitless. Moreover, he can use his magnetic powers in more than one way simultaneously. He can completely assemble a complicated machine within seconds through his powers. He can erect magnetic force fields with a high degree of impenetrability around himself for protection.

Although Magneto’s primary power is control over magnetism, he can also project or manipulate any form of energy that is part of the electromagnetic spectrum, including visible light, radio waves, ultraviolet light, gamma rays, and x-rays. However, Magneto almost always uses only magnetism, since it’s more difficult for him to manipulate other forms of energy. Magneto has also exhibited powers of astral projection and telepathy, and has claimed to be able to control the minds of others, though his abilities along these lines appear to be minimal.

So yes it would seem he is capable of heating a object, on his wiki page it is also mentioned that he can change objects via its molecules at will, however that feat is not backed up by a source on the page itself and as such I will not quote that.