Are there any invented tonal languages in sci-fi and fantasy? [closed]

Ask Question
Asked 4 years, 7 months ago
Active 3 years, 10 months ago
Viewed 7k times
21
This question was closed for seeking recommendations or open-ended lists. It is currently not accepting answers.

Tone is the use of pitch in language to distinguish lexical or grammatical meaning.

This does not mean that that tone is the exclusive conveyor of meaning, merely that it is relevant. For example, many people are aware that there are four different tonal variations of the syllable /ma/ in Mandarin, which all have different meanings. I.e. there exists minimal pairs of words, where the only distinguishing difference is the tonal pattern.

Tonal languages are extremely common in Africa, East Asia, and Mexico, but rare elsewhere in Asia and in Europe; as many as seventy percent of world languages may be tonal.1

Now, the languages we are familiar with in SF (e.g. Klingon, Dothraki, LOTR languages) obviously come from Western traditions, where lexical tone is lacking.

Are there any invented languages in SFF that are tonal?

Is a tonal constructed language created by Suzette Haden Elgin in 1982 included in her science fiction Native Tongue series. Actually a feminist science-fiction.

It was created with the explicit hypothesis that tonal language, unlike traditional western languages, are better suited to express women points of view.

The language was actually constructed and not just hypothetized, like other fictional languages, there are cassettes, a dictionary and grammar rules.

Close Encounters of the Third Kind

You Tube link to Tones

In the movie, the computer eventually takes over as it learns the tonal language. 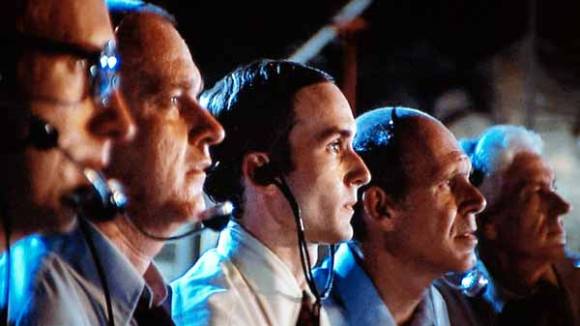 Musician: What are we saying to each other?

Tech#1: It seems they're trying to teach us a basic tonal vocabulary.

Tech#2: It's the first day at school, fellas.

As far back as 1827 with Solresol, invented by François Sudre.

Solresol words are made from one to five syllables or notes. Each of these may be one of only seven basic phonemes, which may in turn be accented or lengthened. There is another phoneme, silence, which is used to separate words: words cannot be run together as they are in English.

The phonemes can be represented in a number of different ways – as the seven musical notes in an octave, as spoken syllables (based on solfège, a way of identifying musical notes), with the seven colors of the rainbow, symbols, hand gestures etc. Thus, theoretically Solresol communication can be done through speaking, singing, flags of different color – even painting.

While the actual language was not used, a very similar one appeared in Voyage to Faremido in 1916.

The term "Faremido" has a clear explanation: the inhabitants of Faremido use a language consisting purely of musical sounds (thus, their language is harmonic in the most literal sense). Every word is transcribed in the novel using syllables of solfege: sequences of the syllables Do, Re, Mi, Fa, So, La, Si. For example: "solasi", "Midore", "Faremido" etc. (Such a language has indeed been devised earlier: See Solresol.) In fact, all terms should be intoned instead of pronounced. Thus, in this world a musical language is used. The protagonist remarks that their speech is both wise (in the meaning) and beautiful (as music), thus thought and feeling are blurred to be the same for these beings.

Jack Vance's "The Moon Moth" postulates a language (Sirenian) which not only requires that it be sung, but that specific musical instruments be used to accompany the speaker/singer to denote social and emotional meaning.

In Raymond Feist's Magician, the Tsurani have a tonal language. A major part of the book involves the lead character (Pug) being captured as a slave. When he and a fellow slave, Laurie, are asked how they learnt to speak the language so well, Laurie explains that he is a bard and has encountered similar tonal languages in his travels. He specifically says that the meaning of words changes with their pitch.

T.H.E.M., by G.C. Edmondson, was the answer to this question. One of the details of that story was that the enemy communication was transmitted over radio as just two tones, high and low, and the narrator character (who had a linquistic talent) learned it by just hearing it in the background over a longer period of combat. The language itself was never reproduced in the novel, but it surely was tonal -- in fact, the full meaning was transmitted by the tones alone, without any morphemes required.

In the Elder Scrolls series of games, dragons have a language of their own, Dovahzul. This language is special because the tonality in its usage does not change the meaning of the sounds being spoken. It does, however, change the world around you.

One example: the word for fire in general is yol. Speaking it in a calm, neutral tone (i.e.: "yol is the word for fire, and also a greeting") will not have any effects, but "shouting" it will cause a stream of fire to come out from the mouth of the speaker, even if they are not a dragon (i.e.: a human).

I used a pair of quotes around "shouting" because the technical, in lore term for the activation of those words is "shout", but depending on the words, other changes in tone will trigger an effect. Whispering zul, mey or gut (voice, fool and far, respectively) is considered a "shout", and doing so will cause the voice of the speaker to be heard saying something else, somewhere else.

Dragons, the native speakers, don't seem too talkative. It is said that what is an argument to them seems like a fantastic, spectacular fight to non-dragon observers. As for the humans who study the language, they make vows of silence. They speak very little and in very considered sentences, because even a short phrase can cause a building to shake. I believe unintended swearing could affect the weather or kill those around them.

The Feline Wizards series by Diane Duane makes liberal use of an invented tonal language called Ailurin. It is described as the language of cats, and is said to have 37 distinct vowel sounds in addition to being "pitched" or tonal (the author also explicitly compares it to Mandarin Chinese and calls it "more sung than spoken"). The opening pages of The Book of Night with Moon claim that (most) humans are incapable of pronouncing it satisfactorily due to these complexities. They also discuss some cultural differences between cats and humans which pop up repeatedly in the actual narrative (and were not just thrown in for "color").

The extent of development of Ailurin is unclear. Vocabulary words are sprinkled throughout the books, largely untranslated, but their etymology and grammatical structure is never discussed in any significant detail. It is also claimed that body language makes up a substantial proportion of feline communication, perhaps more than the spoken language itself. I would see it as right on the edge of a "true" constructed language: the author has clearly invested a nonzero amount of effort into developing it, including a lot of careful thought about the psychology of the beings using it, but you can't freely compose new sentences based on currently available information. So it's not quite at the same level as Klingon (say), but it's a lot more developed than the aliens from "Darmok" (for example), who have the opposite problem of too much grammar and not enough vocabulary (also, their grammar is a one-trick pony).

Not the answer you're looking for? Browse other questions tagged history-of languages or ask your own question.