I'm seeking help again to find two short stories I read in my teens (mid 1960s), that likely were published in the same anthology.

The first was a story about a policeman who has to enter the dreamworld of a criminal to extract some vital information. He becomes trapped and about to die when faced with the reality that the criminal has created but survives by calling on the imagined gun of his late father which was the key icon of stability and strength within his own subconsciousness.

The second story involved man evolving to a higher form of consciousness by "stepping outside" of his corporeal reality into a non physical spiritual reality. There was opposition from those who felt that losing their physical self was a loss of their individuality (Bodysnatchers etc). Why I liked the story was that our hero who narrated the tale was keen to persuade the unbelievers because the new life was so much better.

Maybe you're wrong about reading those two stories in the same anthology.

Starpilotsix seens to have identified the first story as "Dreams Are Sacred" by Peter Phillips. That story was first published in Astounding Science Fiction, September 1948, which is available at the Internet Archive.

The second story sounds like "Unready to Wear", a short story by Kurt Vonnegut, Jr., which was also the answer to the old question Short story about people achieving enlightenment living forever with disembodied minds. Here is the ISFDB synopsis:

A part of humanity has become "amphibious" which means they are able to leave their bodies at will. They have a reserve of very healthy and good looking bodies which can be used at will, but most of their time they spent as incorporeal happy beings. Those humans who haven't left their bodies consider them deserters.

This story was first published in Galaxy Science Fiction, April 1953, also available at the Internet Archive. You might have read it in The Second Galaxy Reader of Science Fiction or in a Vonnegut collection, either Canary in a Cat House or Welcome to the Monkey House. However, if "Dreams Are Sacred" and "Unready to Wear" have appeared in the same anthology, the ISFDB doesn't know about it.

The second story involved man evolving to a higher form of consciousness by "stepping outside" of his corporeal reality into a non physical spiritual reality.

By following the instructions in Konigwasser's book for about two years, almost anybody could get out of his body whenever he wanted to. The first step was to understand what a parasite and dictator the body was most of the time, then to separate what the body wanted or didn't want from what you yourself—your psyche—wanted or didn't want. Then, by concentrating on what you wanted, and ignoring as much as possible what the body wanted beyond plain maintenance, you made your psyche demand its right and become self-sufficient.

That's what Konigswasser had done without realizing it, until he and his body had parted company in the park, with his psyche going to watch the lions eat, and with his body wandering out of control into the lagoon.

The final trick of separation, once your psyche grew independent enough, was to start your body walking in some direction and suddenly take your psyche off in another direction. You couldn't do it standing still, for some reason—you had to walk.

There was opposition from those who felt that losing their physical self was a loss of their individuality.

That's why I can't get sore at the enemy, the people who are against the amphibians. They never get out of their bodies and won't try to learn. They don't want anybody else to do it, either, and they'd like to make the amphibians get back into bodies and stay in them.

Why I liked the story was that our hero who narrated the tale was keen to persuade the unbelievers because the new life was so much better.

"Then you despise human beings and everything they do," he said.

"I like them fine—better than I ever did before. I just think it's a dirty shame what they have to do to take care of their bodies. You ought to get amphibious and see how happy people can be when they don't have to worry about where their body's next meal is coming from, or how to keep it from freezing in the wintertime, or what's going to happen to them when their body wears out."

I can't find any evidence that these are in fact in the same anthology, but the first story sounds an awful lot like "Dreams Are Sacred" by Peter Phillips, with one significant alteration: it's not a criminal's mind he's entering, but rather that of a fantasy writer, for medical reasons.

From the Wikipedia plot description though, we see that a key aspect is the imagined gun of his father:

Pete Parnell is a cynical sports reporter. Early in his childhood, he was cured of frequent nightmares by being taught how to shoot a Colt 45 revolver on the farm where he lived. He was then able to imagine the gun in his dreams and use it to "kill" the monsters. He went on to serve in the army before becoming a reporter.

Parnell is called by a friend, Steve Blakiston, who is a psychiatrist using experimental equipment. A patient called Marsham Craswell, a famous writer of "sword and sorcery" fantasy novels, has retreated into a state where he is living a dream in the fantasy world he created. Pete is asked to enter that dream using the new device and bring Craswell back to reality. Doing this requires somebody who is totally immune, and indeed hostile, to the fantasy.

Craswell abruptly switches them into an arena where Parnell is left to face a fearsome beast. At this point Parnell begins to feel genuine fear, but he quickly remembers his childhood and produces the gun, with which he kills the beast.

According to the ISFDB entry of the story, it was anthologized only a few times prior to the 70s, mostly in some variation of the stories collected in an anthology entitled "Imagination Unlimited", pictured below. 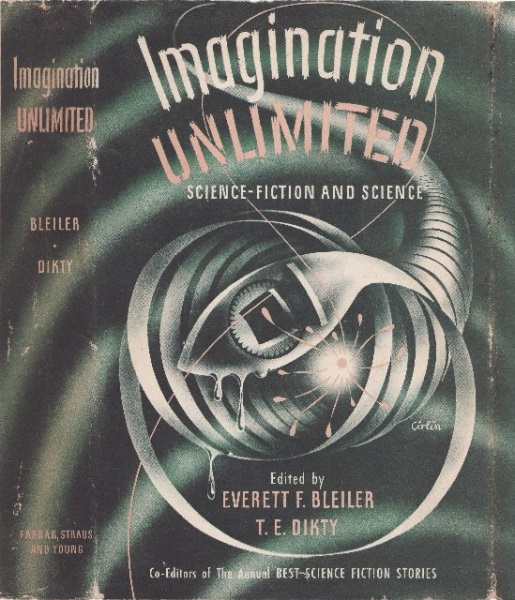 However, I've been unable to find any story listed in the collection that matches what you describe. The closest, "Alas, All Thinking!" by Harry Bates does involve the future evolution of man in a more intellectual direction, but it seems to be of the "giant head" variety and from what I can piece together the protagonist winds up being disgusted by the development, so it would take some significant memory mutation on your part for it to be the story you remember... more likely, you simply misremembered it as being in the same anthology.

11
Looking for a story involving travel to another reality
10
An anthology published at least 17 years ago, containing an asteroid ghost story and others
8
Science fiction anthology with story about a man who kidnaps his daughter's boyfriend
3
Short story collection involving a beast with impenetrable armor eating an old man and getting indigestion
8
Golden Age or Pulp far-future story, where humans are artificially evolved to neutralize them
13
Short Story involving time travel, origin of man, and an ancient enemy
9
Anthology containing the story “Green Mold”(?) where green mold grows on everything and eventually the astronauts
5
Short story where a man is stranded on an island on another planet and records messages for his future self