Did Yoda (and other Jedi) have any lethal Force abilities?

Recently I was watching the duel between Yoda and Sidious and I started wondering on one thing. As we all know, Palpatine hit Yoda's hand with lightsaber which caused the Jedi Master to lose his lightsaber. We also know what happened later. My question however is, would Yoda still have a chance to defeat the emperor after he lost his weapon? Because to me it seems like Yoda (and Jedi in general, with a few exceptions) had no lethal abilities. The Sith had Force choke, Force lightning, etc. But what about the Jedi?

I guess I'm more interested in what could Yoda do to defeat Darth Sidious without using lightsaber. Sure, he could use telekinesis to crush him with some monstrous thing or he could force push him into some abyss should the fight move into some other place. However I was thinking of something lethal in a more direct way. Like emperor's Force lightning or for example Darth Nihilus' Force drain. Could Yoda pull off something like that?

The answers can be both canon and Legends.

While the Jedi do not have Force Lightning they can use a version of Force Choke, which is after all just a form of telekinesis. Luke demonstrates it on Jabba's Gamorrean guards in Return of the Jedi:

Luke did not kill those guards because he didn't want/need to, but there's no reason why he couldn't choke them long enough to kill them if he wanted to. Since Luke could do it I see no reason why Yoda (or any other reasonably powerful Jedi) wouldn't be able to.

Yoda could theoretically have dealt a lethal blow to Palpatine even after he'd lost his lightsaber, either directly (by choking Palpatine) or indirectly (deflect Palpatine's Force Lightning, crush him with a heavy object, etc.). However, it's very unlikely that Yoda would have succeeded in dealing such a blow before being killed himself, which is why Yoda retreated.

There are definitely examples of Jedi using Force abilities that are directly lethal in Legends. For example, the Jedi have a version of Force Lightning which they call "Electric Judgment": 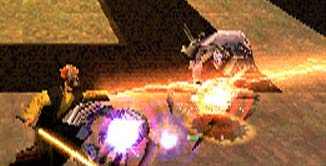 (Apparently a change in the name of the ability is all that's needed to make it all good for the Jedi.)

In Legends, Mace Windu gave General Grievous his cough by crushing Grievous' lungs. Windu probably would have been able to kill Grievous with this technique alone if Grievous hadn't managed to escape in a gunship.

In Canon, offensive Force powers are either kinetic or "electric" (i.e. Force Ligtning used by Sith and Bendu ). In Legends, situation is much more chaotic, because basically every author tended to run his imagination wild. So we have Electric Judgment for Jedi, various mind attacks (crushing someone with fear for example), poisoning someone with Force, Dark Side Force tendrils, opening rifts ins space with Force, severing someones connection with Force etc ... It is better to avoid Legends in this answer, because you could get something silly like Yoda planed to open wormhole in space so he could push Palpatine directly to Mustafar to fry with Vader :)

So let's return to Canon. Jedi do not use Force Lightning. Reason for that is unclear, possibly because this requires intense hatred and taps into Dark Side. That leaves us with various kinetic abilities. Basically, Jedi would either use something against their opponent (throw at him, pull under him ...) or they would try to use their opponent as object (throw, push, pull or even choke him) . Problem for Yoda and any other Force user that fights against another Force user is various Force Shield or Force Barrier techniques that prevent directly manipulating with your opponent. Yoda did manage to push Palpatine once at beginning of their duel (mostly because Palpatine underestimated him) and in the end they were both pushed back by accumulated Dark Side energy bulb. More reasonable strategy for Yoda, when he lost his lightsaber, would be to throw something at Emperor. Of course, this is all academic, moment he lost his lightsaber Yoda was struggling to contain Palpatine's lightning with his bare hands. And when they were separated he decided it would be not very wise to continue fight without his lightsaber.

Not the answer you're looking for? Browse other questions tagged star-wars star-wars-legends jedi the-force yoda or ask your own question.

82
Safety railings in the Star Wars universe
34
When Qui-Gon flipped the die in his favor, didn't he follow the Dark Side?
45
How is the Jedi mind trick not a dark side technique?
28
Is Vader's Force Choke specifically a dark side power?

27
Why did Jedi in the prequel movies use the Force offensively?
15
How did Yoda counter Count Dooku's Force lightning?
10
Has Frank Oz discussed similarities between Yoda and his other roles?
1
Are young Jedi more in tune with the Force than Sith and older Jedi?
11
Why did Yoda and Palpatine talk about Anakin?
4
Are there any other Force users remaining in the galaxy by the time of RotJ?
2
How can you defend against Force Telekinesis?