Who is the titular "Heir to the Empire"?

So I came across the cover of this book... 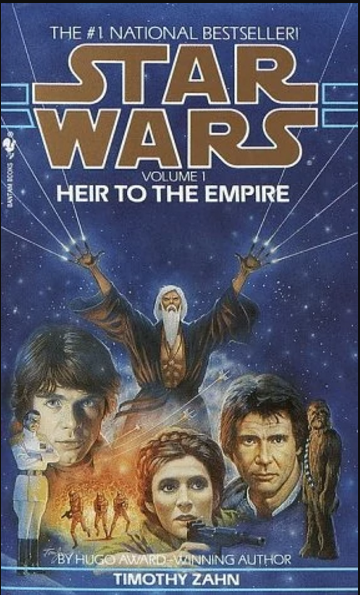 ...and I was wondering who this "Heir to the Empire" is. This book (or novel, to be exact) takes place after the events of Star Wars: Return of the Jedi, after the Empire was defeated. I'm not entirely clear who this Heir is supposed to be. At first, upon looking at the cover, I thought it was Darth Vader, Sidious' apprentice who would had eventually killed Sidious due to the Rule of Two. Unfortunately... he's already dead. Is this Heir then none other than Luke Skywalker?

Who's this supposed Heir to the Empire?

The book Heir to the Empire names two individuals as the titular heir. The purpose of the title serving as a counterpoint; Just who is the true heir to the Galactic Empire, Leia (and the Rebels) or Thrawn (and the rump Empire)?

The Lady Vader (AKA Princess Leia)

“I understand,” she nodded, wishing she did. “But now you know who I am?”

The alien’s face dropped a couple of centimeters closer to the floor. “You are the Mal’ary’ush,” he said. “The daughter and heir of the Lord Darth Vader.”

Khabarakh drew himself up stiffly. “We were not the Emperor’s servants,” he grated. “We were a simple people, content to live our lives without concern for the dealings of others.”

“You serve the Empire now,” Leia pointed out.

“In return for the Emperor’s help,” Khabarakh said, a hint of pride showing through his deference. “Only he [The Emperor] came to our aid when we so desperately needed it. In his memory, we serve his designated heir-the man to whom the Lord Vader long ago entrusted us.” [Thrawn]

“I find it difficult to believe the Emperor ever really cared about you,” Leia told him bluntly. “That’s not the sort of man he was. All he cared about was obtaining your service against us.”

In the final novel we have a third contender; Joruus C’baoth.

Pellaeon hid a grimace. Joruus C’baoth, insane clone of the long-dead Jedi Master Jorus C’baoth, who a month ago had proclaimed himself the true heir to the Empire. He didn’t like talking to the man any more than Thrawn did; but he might as well volunteer. If he didn’t, it would simply become an order. “I’ll go, sir,” he said, standing up.

Grand Admiral Thrawn was a Chiss who took command of the Imperial Fleet after the Emperor and Vader's defeat. It is he who is the main antagonist of Heir to the Empire, as well as its sequels, which make up the Thrawn Trilogy.

While Thrawn takes control of the remaining fragments of the Empire and the Imperial Fleet, there is another force at work who proclaims themselves to be the true heir to the empire: Joruus C'Boath. He believes that he is the intended replacement for the Emperor and that he should be the one to rule. Unlike Thrawn, however, he has no actual power (politically speaking that is, he's actually quite a powerful Dark Jedi), so his claims hold little merit as far as the rest of the galaxy is concerned.

Overall, it's a bit ambiguous as to who exactly the heir truly is, but it was Thrawn who actually took control of the Empire after the Emperor fell, so regardless of who the true heir might be, Thrawn is the literal heir, because he become the new Emperor, in all but name.

There are a number of key players in the book who could be candidates for "Heir to the Empire":

Thrawn was the only non-human to be granted the rank of Grand Admiral in a secret ceremony years before. He is an excellent tactician and was highly successful at shoring up the remains of the old Empire

She was the Emperor's Hand, a secret Force-sensitive operative who directly did the Emperor's bidding. While she believed she was the only Hand, Grand Admiral Thrawn hinted at the existence of others.

Luke is the son of Darth Vader, who was being seduced to become the new apprentice of Darth Sidious (aka Emperor Palpatine) at the expense of his father. Ultimately though, he (and indeed everyone else) was being manipulated by:

Note that "uu" in his name. He was the clone of the Jedi Master Jorus C'Boath, who was lost as part of the Republic's venture to explore beyond the galaxy. Joruus C'Boath is quite insane, perhaps as a result of cloning a Force-sensitive mind. While he was originally a tool for Grand Admiral Thrawn, ultimately he had his own agenda and tried to bend both Luke to become his servant, even to the point of creating a clone of Luke (Luuke Skywalker) from the hand he lost in Bespin.

In reality, it is Joruus C'Boath, not Grand Admiral Thrawn. He fell to the Dark Side in his madness, and began to style himself as a new Galactic Emperor. With his power in the Force and his Dark side, he was the the one most likely to succeed Palpatine as Emperor.

Not the answer you're looking for? Browse other questions tagged star-wars star-wars-legends character-identification or ask your own question.

84
Which are the Two Towers in The Lord of the Rings?
0
Which witch is the titular Witch’s Ghost in Scooby Doo and the Witch’s Ghost?