Possibly an educational illustrated short story written as part of a sci-fi genre example, or even an actual comic/story that was adapted for that purpose. This was in 1993, and I was in third grade, so my memory is quite fuzzy.

What I can remember:

The total length of the comic/story was maybe 10 pages.

I've been trying to track this story down for years, even contacting my old third grade teacher about it. So far I've had no luck at all, so it would be amazing if someone can help me track it down.

It sounds unlikely that your teacher had you read a horror comic for adults in third grade, but this reminds me a lot of an EC Comics sci-fi/horror comic called "Time For a Change!" Of course, several of EC's comics were adapted or plagiarized from sci-fi novels or short stories (like Bradbury's works), so it might just be inspired by the same original story as your comic.

Possibly an educational illustrated short story written as part of a sci-fi genre example, or even an actual comic/story that was adapted for that purpose. This was in 1993, and I was in third grade, so my memory is quite fuzzy.

Written by Al Feldstein and drawn by Joe Orlando.

The artwork was of the earlier 50's-70's style, depicting an barren, abandoned world void of all signs of life save for several enormous statues several hundred feet tall.

The comic was originally published in 1953, the early 50s. The world, Pluto, wasn't completely barren, but had plant life in addition to giant statues, although those statues were not several hundred feet tall.

The plot of the book focused on a mixed crew of space explorers/adventurers, with the story being told from the point of view of the male lead explorer.

Not sure I'd call it mixed, they were all handsome men, but the story was told from the point of view of the lead explorer.

One of the crew chips a piece out of the foot of one of the statues, not recognizing the material. Later (possibly on a return trip), they all realize with shock that the statue is reacting in pain to having a piece of his foot removed, but is moving so slowly that minutes, or hours pass for one second of their time.

Nobody chips a piece out of the statues. As they stay on the planet, they realize the statues are alive because the humans themselves get accustomed to the slower time. As their bodies slow down, the statues seem to speed up, until they're chased by one of the aliens back to the ship. They flee the planet.

The story ends with the space crew leader reflecting on what is must be like to live in a universe so much slower than ours, and wonders if we're not impossibly slow for some other beings too fast for us to see.

The comic ends with the ship returning to Earth with all the astronauts moving so slowly the welcome committe believes them to be dead. The last panel has the leader reflecting on this while being embalmed.

The aliens were human-oid in the sense they had two legs and two arms, but I don't recall their faces looking at all human.

Yes, the aliens had two legs and two faces, but looked like monsters.

The total length of the comic/story was maybe 10 pages. 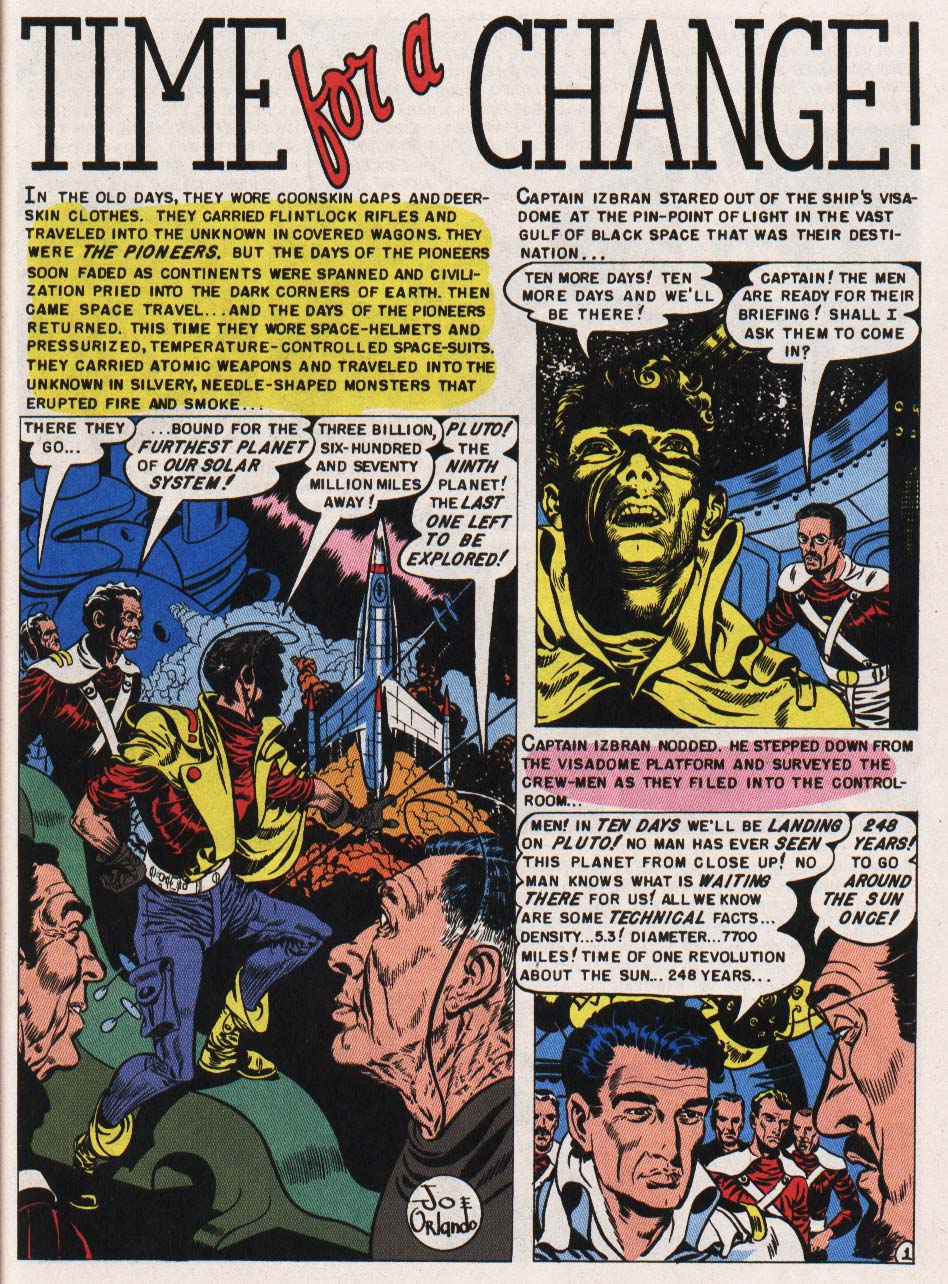 Looks like this user found it. This is absolutely the story, and now I remember the cards in question.