What book featured a city with many shrines for gods? [duplicate]

I read a thin fantasy novel about a city, where many gods were worshiped, each god had some type of temple, and one night each year all the gods roamed the streets and you'd better stay inside. I remember that a great frog-god hopped through the streets.

Anybody know this book?
I read it at least 25 yrs ago, it was an English-written Dutch library book. Not from a well-known writer I think.

This is God Stalk by P.C. Hodgell, a 1983 book now published by Baen (there have been several), from which it is currently available in either print or electronic versions. 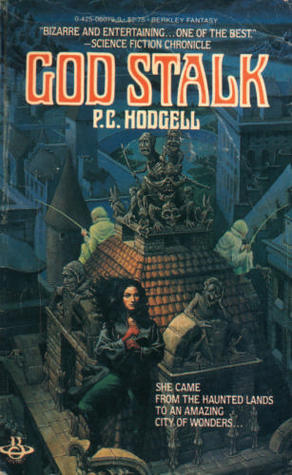 In the first book of the Kencyrath, Jame, a young woman missing her memories, struggles out of the haunted wastes into Tai-tastigon, the old, corrupt, rich and god-infested city between the mountains and the lost lands of the Kencyrath.

For a long time, there were only a handful of books, Pat being busy with her job as a professor, but she's retired since and her writing has accelerated. The eighth book, The Gates of Tagmeth is currently being edited for release in 2017.

"Ha!" She started to flourish the vessel, remembered just in time that it was nearly full, and put it down with a thump. "I told Tubain that only ignorance or imbecility could have brought anyone out on such a night. The Feast of Dead Gods is what I expect you narrowly missed becoming. Once a year, on Autumn's Eve, all the gods who've lost or outlived their worshippers come back from wherever it is they've been and spend the night wandering the streets. Some are harmless enough, but most are hungry and out hunting for sacrifices—which is fine if they happen to relish potted begonias, but not so good if their people were fools enough to raise them on baby's blood or virgin's hearts. It's said they can't enter any building without an invitation, but most Tas-tigons seal up their windows and doors on that night just to be sure. Not Tubain, though; it wouldn't be hospitable, he says."

The frog god is a later evolution of his character, or possibly a return to what he once was:

"Well, this is more on the order of a spinach custard— just as messy but potentially more nourishing. As I was saying, the old attributes seem to have been kept, but not with the same emphasis . . . and that's where things began to go sour for poor old Gorgo—pardon, Gorgiryl. Instead of the tears of life—rain, that is—you have sterile salt water; instead of the world's salvation, endless sorrow. It's the whole myth frozen in the wrong place, with everything distorted to make its lowest point look like its proper end. What easier way to turn a simple, rather dignified religion on its ear? You're still looking blank. Come, I'll show you an example, the best one of all."
She took him by the arm and led him half against his will to the threshold of the inner chamber. Neither had entered it since the night its occupant had died.
The basins were still there, also the short scroll peeking over the idol's webbed fingers; but more vivid than either was the memory of the bowed, bewildered figure in its garish finery that had stood trembling before them for so short a time.
"As the man that Bilgore made him," said Jame, "he was ludicrous." Then she pointed at the statue looming dark and cool in the shadows. "But as a giant frog . . . ?"

8
Title of a fantasy trilogy where a group of children is transported to different worlds?
10
Fantasy/urban novel about Greek-Roman gods
29
I am looking for a story of gods/deities creating a world, then assigning a boy to name everything in that world
5
Novel, group transported to a fantasy world, wild/chaos magic
10
Looking for a book from an old series about kids with magic sneakers that give them superpowers
8
Young adult fantasy/scifi novel about Ancient Egypt
5
Book about people living in a city in a ravine
8
Seeking a novel with the post-apocalyptic remains of the European powers fighting on the Isle of Man
10
Novel where the main character pretends to be a princess