Why does Loki look like he does in the movies?

Apologies for the slightly vague title.

It is revealed during Thor that

Loki was taken as a baby and is actually the son of Laufey, king of the Frost Giants.

Is there any explanation as to why he doesn't look like the rest of his race?

It's a combination of his natural appearance, along with Odin's interference. He was naturally born smaller than regular Frost Giants. When Odin found him, he cast a spell on him to change his appearance to that of an Asgardian (there was a short flashback scene showing this in the film). As he grew up, this spell seems to have maintained its power, even as he gained knowledge of Asgardian magic, so Odin must have made his spell hidden from Loki. Otherwise, he would have noticed the spell on himself while he was mastering Asgardian magic.

During Thor, we only see his appearance change back to his natural blue skin when he's attacked by a Frost Giant's freezing touch or when he uses the Casket of Ancient Winters. His appearance then changes back shortly afterwards. It seems Odin's spell on Loki was extremely powerful. It only ceases effect when Loki's Frost Giant nature is needed, and only temporarily. Loki doesn't seem to be capable of detecting the spell, and potentially is unable to remove the spell (although it's unclear if he would want it removed).

The best answer likely comes from the mythology from which the character is lifted from.

At Marvel's House of Ideas, Loki was descended from giants who were strong in magic use and innately magical beings. After a mortal conflict with Laufry (his mother in mythology, his father at Marvel) Odin saw the potential in the boy and took him as his own.

After slaying the King of the Frost giants, Laufey, in battle, Odin found a small Asgardian-sized child hidden within the primary stronghold of the Frost Giants. The child was Loki, and Laufey kept him hidden from his people, ashamed of his son's small size. Odin took the boy because he showed strength when Odin slew his father in combat and raised him as his son alongside his biological son Thor.

Loki is a trickster god and as many such deities is a shapechanger and powerful magic user. Likely, young Loki was shielded using the magics of Odin, but as he grew older and more skilled in magic, he was more than capable of rendering his appearance pleasing to the eye of whomever beheld him. Coupled with his smooth words and crafty demeanor, it was not long before he lived up to his name: Loki, Lord of Lies. 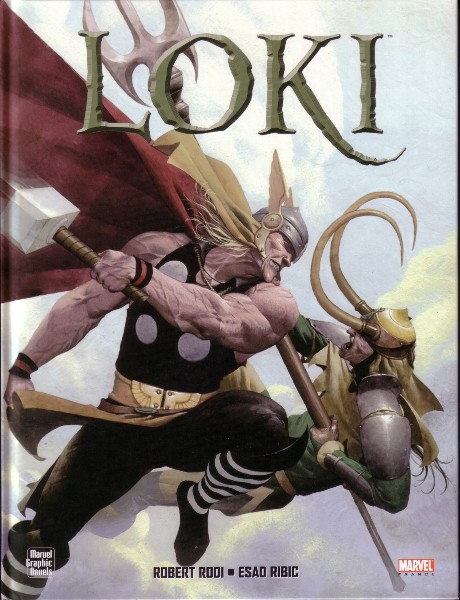 The only mention I see of why he looks that way in the Marvel Wiki is because when Odin adopted the boy, he lost his powers and gained that of the Asguardians, I'm assuming, thorugh Odin's power as All-father.

I had always assumed that Loki's taking of an Aesir's appearance was his own doing and not Odin's, since Loki is a renowned shapeshifter. I thought he was just using his magical power to more closely imitate what he saw, even as an infant. The movie never really made it clear, I guess. If it was Odin, I suppose that Loki was sort of locked out of his Jotun appearance in most cases, though he still seems to retain at least some of his Frost Giant power, like his ice knives. If it's Loki's doing, he may not have been consciously aware that he was taking a different form, since he'd been doing it for so long, and once he'd figured out that he was a Jotun, his hate of them would have compelled him to keep his Aesir visage. In the Avengers, I don't think Loki's truly come to terms with his parentage any more than he did in Thor, he's just being more open about it. He never seems very proud of it, mostly using it as an example of his differences from Thor.

I've been studying Norse Mythology for some time now, and have found Loki (also known as Lopt, Lokka, Loke, Logathor) to be one of the most interesting, diverse and complex characters amongst the Gods. His name dates back as one of the eldest Gods, along with Odin (woden) and Thor, aswell as Honir and Tyr. Unfortunately he is often misrepresented, and common mistakes have been regularly made regarding him, the most common I've discovered are:

Obviously Marvel do a fantastic job taking various concepts/ideas from the Norse Mythos. So really his appearance in the movie could be due to a combination of all of the above suggestions - who is to know for sure? :)

Maybe Loki changed to the appearance of those who truly loved and accepted him. Maybe he thought that this Asgard doesn't come from a store...maybe, just maybe, this Asgard means a little bit more.

I assume it was Odin's spell, because he still looked Aesir when he was wearing the chains that supposedly suppressed his magic.

7
Why Isn't Loki's Skin Blue
3
How can Loki's default appearance be like Asgardians/Humans?
20
Why doesn't Loki look like a Frost Giant in the TVA?
4
Why does cartoon vs live-action Loki look so different?

19
In the movie Thor, why are there several scenes where they ride horses?
29
Is Thor more than an Asgardian?
4
Why didn't Doctor Strange check this before he created a portal to Norway?
4
What is the in universe relationship between the Asgardians and Nordic cultures?
1
Why wasn't Loki injured in the opening scene of Infinity War?
20
Why doesn't Loki look like a Frost Giant in the TVA?
4
Why does cartoon vs live-action Loki look so different?
15
Are the Asgardian Gods and the Asgardian People the same thing?