Who was the dead Voyager crew member discovered by the two Voth archaeologists?

In the first act of Voyager episode "Distant Origin", we see two Voth archaeologists recover the human skeletal remains of a Voyager crew member in a cave on an M-class planet.

Strangely, the remains were never identified in the episode. Are they any clues in prior episodes how a Voyager crew member died on this planet? And why his corpse was not retrieved?

Although the character isn't named in the episode, The Star Trek Voyager Companion (billed as the "official companion to Star Trek: Voyager") identifies the remains as belonging to Ensign Hogan, the maquis crewman who was killed in a cave in VOY: Basics 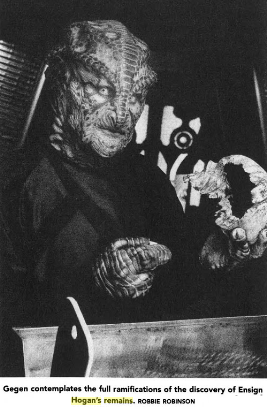 You can see the similarity in the caves in the shots below.

The remains were those of Maquis crewman Hogan, a recurring character in the second and third seasons, who died in the third season premier ("Basics, Part 2"). The Kazon had stranded Voyager's crew on a primitive planet, and Hogan fell prey to a large animal while investigating a cave. Due to the danger posed by the animal, Hogan's crewmates were unable to retrieve his remains. 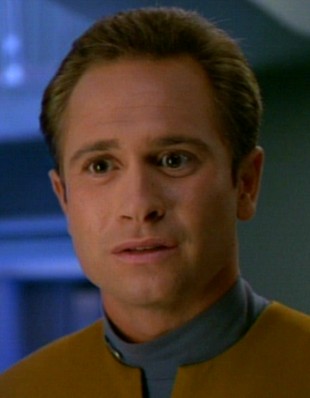 That unfortunate crewman was killed by an critter while exploring the surroundings, when the Kazon left the crew of the Voyager on a deserted planet to die.

It happened in the first episode of season three.

I agree that the remains were supposed to be Hogan, but the only issue I see is that Hogan's uniform was retrieved in Basics part 2 and used by Chakotay to make a water filtration system, including his rank insignia.

In basics part 2 an unnamed character in a blue uniform was pulled off a rock and part eaten by the same creature, before they blocked the cave up so the creature would slowly starve to death.. perhaps it could have been his remains?