Who was the first super hero with super-speed powers in comics?

Who was the first super hero with super-speed powers in comics?

Plus question: Any prior hero from Pulp magazines or books with super-speed?

Hugo Hercules was featured in a comic that ran for five months between 1902 and 1903. While specifically described as having super strength, in one comic he was able to pull a line of train cars at the same speed as a train.

A good-natured man endowed with superhuman strength, the character of Hugo wandered about town, helping people with their problems and shocking them with his surprising displays of power. He was so strong he could pick up an elephant, kick a house like a football, wield an artillery cannon like a handgun, and lift a locomotive engine off the tracks and pull its cargo behind him at train speeds. 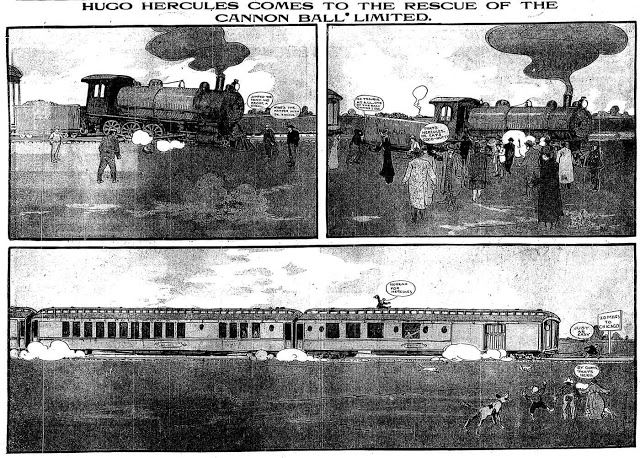 The story addresses an elixir, invented by a Prof. Gibberne, that accelerates all of an individual's physiological and cognitive processes by some orders of magnitude, such that although the individual perceives no change in themselves, the external world appears almost frozen into immobility and only the motion of most rapidly moving objects - such as the tip of a cracked whip - can be perceived.

The exploration of the consequences of this is incomplete; for example, the inventor and his companion find that while under the influence of the elixir they can easily singe their clothing from the heat produced by friction against the air as they walk, such is the rapidity of their motion; but this same air friction would render it impossible to breathe at a correspondingly accelerated rate, and this difficulty is ignored.

For an earlier literary hero who admittedly toes the border of mythology, Hiawatha from Henry Wadsworth Longfellow's famous Song of Hiawatha published in 1855:

Swift of foot was Hiawatha
He could shoot an arrow from him
And run forward with such fleetness,
That the arrow fell behind him!

For the first actual comics superhero, I'm going to suggest The Whizzer who debuted in USA Comics #1 (Aug. 1941), published by Timely Comics. 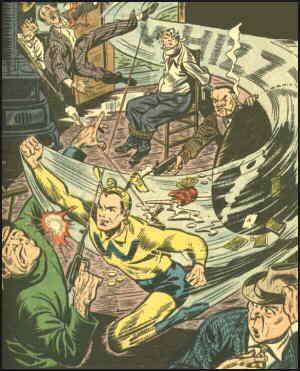 Robert L. Frank was born in St. Louis, Missouri. The origin of the Golden Age character begins while Robert Frank is on a trip to Africa with his father, Dr. Emil Frank, where Robert is bitten by a cobra. Dr. Frank saves Robert by a transfusion of mongoose blood, and soon discovers that his son has developed super-speed. Frank then decides to fight crime and eventually accepts the offer of Invaders member Bucky, who forms the superhero team the Liberty Legion to rescue the other Invaders, who have been brainwashed by the villain the Red Skull. When the Liberty Legion and Invaders eventually disband after World War II, the Whizzer joins the newly formed All-Winners Squad. The Whizzer afterward spent some years battling alcoholism and depression, and was, for some time, homeless in the Bowery section of Manhattan. He also works as a nuclear laboratory technician.

As we are including novels, I propose the 1785 book "Baron Munchausen's Narrative of his Marvellous Travels and Campaigns in Russia". One of the cohorts and friends described therein is Berthold, the world's fastest runner.

Not the answer you're looking for? Browse other questions tagged comics history-of powers or ask your own question.