What is the function of the spikes in Batman's gloves?

There are some very remarkable and distinguishable element's in Batman's outfit. As much as Batman's appearance has change through the years, media or franchises, the pointed ears, the bottom of the cape resembling the wings of a bat and the spikes on his gloves are clear trademarks. Color schemes, batsymbol shape and the utility belt may change, but there are certain things that seem to be always present on a Batsuit, like the spikes on the gloves.

In the Nolan Batman trilogy these spikes are explained as part of a ceremonial gauntlet which came really handy in close combat to parry blades (Batman Begins). This idea was taken a little bit further on the sequel (The Dark Knight) turning these spikes into blades that could be weaponized by being thrown through a spring-like mechanism. That's the only explanation I can recall ever seeing about why those spikes are there on Batman's gloves.

In the Burton movies Batman was able to block some attacks (even gun shots) with his gloves (which had additional gadgets), but the spikes did not have anything to do with blocking attacks and their function was not explained.

I can't recall reading a comic in which these spikes were ever being used or even mentioned. I have seen plenty of gadgets on Batman suits (on the cape, boots, cowl, etc.). I think I can recall him mentioning that he stores additional gear on them 1, but I have never seen those spikes specifically being used for anything.

So, apart from those references in Nolan's movies, has the function of the spikes in Batman's gloves ever been shown, discussed or mentioned?

1 If I recall correctly, in Batman Year One, he loses his utility belt when the building he is in is set on fire. He is able to pull additional lock-picking tools from his gloves and open a lock to find shelter from the fire (he called himself a lucky amateur). In The Doom That Came to Gotham he has a tiny saw that he uses to free himself from chains.

Batman is often depicted as wearing dark-colored gloves which extend to cover most of his forearms. In the earliest Batman stories of Detective Comics, the costume featured a few curiosities before it evolved in to its more or less standard style. The first gloves were purple in color, ordinary looking, and lacked any sort of scalloped fins or other stylings, and only came to the wrists. The second Batman adventure depicted the character wearing no gloves at all. A few issues later the gloves became longer, and by 1940 the familiar fins were added (in early stories, these pieces originally resembled miniature, scalloped bat wings, but eventually became three simple triangular fins).

In other words, he initially didn't have them, and they were decorative (and shaped like batwings before they got simplified) after that, probably right up until Batman Begins, where they gained a function. 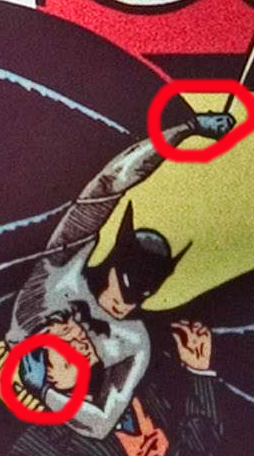 In some issues they can be projectiles, or even just quick access batarangs.

But I would say that the most important purpose of them is to fight against sharp weapons, like knives or swords. They work as shield but most important they can be use to make the sword get stuck between them in order to disarm a foe. It's not just a Batman thing. Many light historical armours had some kind of mechanism like this.

21
Why are there so many different bat symbols?