What cartoon (with the word kaiju was in the title) has a boy that has a red rhino monster and chases and fights other monsters?

All I can remember is the boy had (I think) red and black hair and he bonded with a rhino that was red and black. He used a glove to control the monsters. His friends help him out.

This is Kaijudo! Rise of the Duel Masters. The young protagonist travels around with his friends, battling other Kaiju with his rhino-like monster which he controls with a glove. 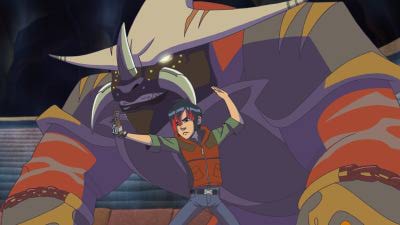 Could it be Flint The Time Detective? I've asked similar question in one of my comments, about "Hoom daga, hin daga" opening song and got that show.

Plot: The series is centered around the adventures of Flint Hammerhead, a boy from the prehistoric era who was resurrected from his fossil prison and became a Time Detective, although his competency as a detective is dubious. Much like Inspector Gadget, much of the heavy thinking is done by Flint's friends Sarah and Tony Goodman who accompany him on his adventures. Flint, however, pulled his weight in battle when he would fight with the aid of his father Rocky Hammerhead whose partial resurrection left him a sentient, talking rock with a face. Rocky, fashioned into a hammer for Flint, served Flint as both sturdy weapon and adviser, the latter both in and out of battle. Flint's job as a Time Detective was to go back in time and convince time-shifters, cute, collectible creatures to ally with him to protect the timeline.

Usually, he fought against Petra Fina and her cronies Dino and Mite (very reminiscent of Marjo, Grocky, and Walther from Time Bokan), servants of the Dark Lord. The Dark Lord himself sought to use the time-shifters' powers to invade the Land of Time, the creatures' home realm from whence he had scattered them. Similar to Pokémon or Digimon, time-shifters originate as small, cute creatures who can "shape-shift" into much stronger forms for a time before reverting. This usually took two forms: an evil form induced by the Dark Lord's magic (in the form of the Petra Stamp or Uglinator's mark) and a good one brought forth by Flint and his team.

4
Cartoon about a boy and his friends capturing monsters
6
Cartoon series with Infinity gauntlet-like worn by a teenage boy
6
Cartoon - boy traps monsters into balls on a magical bracelet
6
Anime about a boy who summons a blue 'legendary' monster that fights other monsters
2
Anime/cartoon? - redhaired kid in yellow jacket fights monster with a magic glove that dispenses food