The story was in an anthology comic book, possibly something like Tales From The Crypt but not necessarily.

An escape stunt artist reveals to a young man that the secret for him surviving his dangerous stunts is a magical watch he got (he doesn’t tell how) that, when pressing a button, tells the exact time of the user’s death to the second. As the performer’s moment of death approaches, he hands the watch to his sucessor and promptly dies. (I don’t remember how “freak” his death was.)

The new user presses the button and sees he’ll die in 79 years (he's in his twenties) and takes up the same line of work as the previous user. But he’s reckless and doesn’t care about the safety of bystanders since “Hey, I won't die!”

Eventually, the father of somebody who died at one of his shows approaches him in his convertible and throws a bomb in. He smugly says, “HA! It won't go off!” Cue KABOOM.

He finds himself in a hospital bed, in excruciating pain, armless, legless, blind, totally paralyzed, and knowing he‘ll stay like that for 79 years. He’s not deaf, though, and hears a doctor talking about the weird watch that miraculously was unharmed by the explosion but only shows a time of tomorrow, midnight.

I read a Brazilian translation, the title was “O Relógio da Morte” (“The Watch of Death”), but of course that doesn’t mean this is the original title. It was the late 70’s or early 80’s, but the USA publication date might have been much earlier.

Based on the description in the TV Tropes section "And I Must Scream", I believe this to be "The Death Clock", written by Mark Evanier & Robert Kanigher and drawn by Sonny Trinidad, originally published in House of Mystery #214 (Fantomen nr 8/1994).

A stand-alone comic in the magazine Fantomen featured a young man who comes into possession of a watch that shows what time you will die down to the second, after its original owner is killed right on time. When the man finds that his own date of death is decades into the future (he'd be in his early 90's), he embarks on a career as a daredevil, confident in the knowledge that he cant die before his time. However, his careless stunts causes several fatalities, and a revenge-driven widower attacks him with a grenade, which ends up blowing off his limbs and renders him blind and mute, leaving him helpless, blind and immovable in a hospital bed with nothing to do but count the seconds for the rest of his life. To drive the irony in further, one of his doctors picks up the watch and his time turns out to be the next day at midnight, but the doctor has no idea of the clocks power. 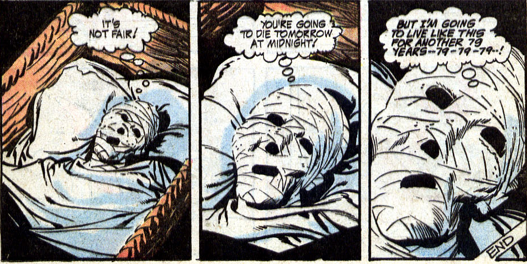