Looking for the title of a novel where the Earth turns out to be a spaceship. I seem to recall the cover has maybe a gigantoid rocket motor firing off? Premise is that some sort of catastrophe occurs, and these rocket motors are activated, booting the Earth into space. Might've been published in the 90s or 00s. I think there was something in there about a giant wall appearing that was a big deal somehow.

CUSP (Goodreads; Internet Speculative Fiction Database), a 2005 novel by Robert A. Metzger, involves the mysterious appearance on Earth of a world-spanning wall, with the partial conversion of Earth's oceans into fuel for planetary rocket engines, in response to a sudden change in the sun's galactic orbit.

The cover is exactly as you describe: 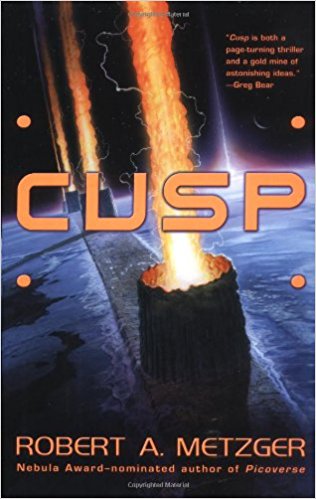 The book's title is an acronym for "Controllable Universal Sentient Plasma", a program to augment humans technologically.

10
Looking for an old German book about a journey to another planet (approx. from the 30ies)
7
Looking for the title of a sci-fi novel about an alien who crash lands on earth and the mysterious fuel required to restart her spaceship?
8
SF Novel About Evolved Dinosaurs in Cylindrical Spaceship Coming to Earth
7
Identify space opera/erotic thriller/murder mystery novel starring alien protagonist with prehensile tail?
10
Looking for tv series title about space ship hidden on earth
6
Sci-fi novel about a world-destroying cataclysm from the 70s or earlier
8
Looking for an author's anthology of short surreal/absurdist fiction (80s-90s)
4
Kids/YA chapter book with invisible spaceship and force field, 1988 or earlier
6
Fantasy novel: dueling sorcerers and a damsel in distress