Why didn't Luke use his lightsaber during his mission on the first Death Star?

This weapon is your life

Obi-Wan Kenobi, Han Solo, Luke Skywalker, Chewbacca, C3PO, and R2-D2 arrive at the Death Star I. Their mission was originally to go to Alderaan - unfortunately that didn't happen. When they board the Death Star I, Han and Luke are disguised as Stormtroopers. Obi-Wan leaves them because he knows that his former student is there to face him.

Now let's talk about their weapons:

Focusing on Luke Skywalker, he already has a lightsaber at this point given by his master, Obi-Wan. Now, why didn't he use his lightsaber? And why did he just leave it on the Millennium Falcon? He could have used his lightsaber to kill his enemies such as Stormtroopers.

Luke's a farmer, not a swordsman. He had never held a lightsaber in his entire life until that day. However, he has used rifles before; when he went out looking for R2-D2 on Tatooine, he carried a rifle; when the Tusken Raiders attacked, though, they quickly overpowered him with their melee fighting skill.

It takes many years to become proficient with any melee weapon; the lightsaber is much more dangerous, and requires a strong control of the Force to use effectively against enemies with blasters. Note how in Empire Strikes Back Luke still used a blaster except for when he fought Darth Vader: 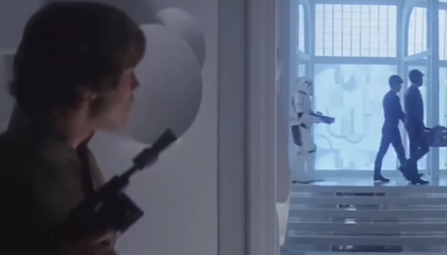 (Apparently Lando got Han's clothes, and Luke got his blaster.)

Without intimate knowledge of the weight and balance of a lightsaber, and a greater understanding of how to control the Force, it would have been very difficult for Luke to deflect blaster bolts. Without this important defensive ability, if Luke had tried to kill a Stormtrooper on the Death Star with his new lightsaber, he would have been shot many times before taking his first swing. It was much easier for him to use a blaster, something he was more familiar with.

For a more modern example, look at Finn from The Force Awakens. When the First Order attacks, he asks for a weapon even though he's already holding a lightsaber. Then, using the lightsaber, he kills one guy who wasn't paying attention, before nearly being defeated by another guy with an electrified stick. And Finn is a soldier with melee weapons training.

Oh, and also, sometimes there are places a lightsaber just won't reach:

Never underestimate the importance of range.

Why did Luke leave his lightsaber behind?

It didnʼt fit in his pocket.

Another answer to this question suggests that Luke left his lightsaber behind on the Millennium Falcon because he knew he lacked the familiarity and skill to wield it effectively.

While Luke did lack familiarity and skill with the lightsaber, this is not the reason he left it behind. His skill did not factor into the decision; he just didnʼt have a place to put it.

Once the Falcon was captured and brought on board the Death Star, a critical part of the escape plan was for Luke and Han to disguise themselves as stormtroopers. There was no room inside the stormtrooper armor to conceal a lightsaber. Having one hanging off a belt would have aroused some serious suspicion as well.

You may not have noticed, but Han left his DL-44 blaster pistol behind on the Falcon for the same reason. He couldnʼt hide it while wearing the stormtrooper uniform. Chewbacca left his bowcaster behind, too. After escaping the garbage masher, Han can be seen running around with an E-11 while Chewbacca uses a DLT-19.

He could use his lightsaber to kill his enemies such as Stormtroopers.

Not with as much skill.

The guy's been using a blaster much of his life. Obi-Wan just handed a lightsaber to him like a day ago or something.

The exercise that Luke does where he's essentially blind and has to counter the blasts from the training sphere, that looks impressive, until you realize that it's a task they give very young children in the prequels. It's in the scene when Obi-Wan interrupts a class of younglings that are all doing it with proficiency when he comes to ask Yoda about the planet missing from the data-base.

So what we're talking about here is that Luke is basically at the skill level of less than a eight year-old.

In roleplaying terms, you'd carry the weapon you were comfortable with and had more dice in.

Even so, William Jackson makes an excellent point--their disguises really did not allow them to carry their standard weapons, anyway, even if they had wanted to.

Han and Luke are disguised as Stormtroopers

Now, why didn't he use his lightsaber?

Because he was disguised as a Stormtrooper.

Luke didn't actually use the Lightsaber in combat (aside from opening an AT-AT on Hoth and his battle with Vader on the Cloud City) until *Return of the Jedi*, where he used it to great effect.

I think that he just preferred the blaster, as he hadn't received any training (aside from the training droid) using a bladed weapon. Somewhere between Empire Strikes Back and Return of the Jedi, he receives some training, and is therefore able to use a lightsaber effectively (he doesn't use a blaster once in Jedi)

Not the answer you're looking for? Browse other questions tagged star-wars a-new-hope lightsaber luke-skywalker or ask your own question.

50
Why does Luke draw his blaster instead of his lightsaber to deal with an apparent threat?
31
In The Force Awakens, how is it that Finn knows sword combat?
63
Why is Lando wearing Han's clothes?
24
What is this First Order weapon that can block a lightsaber?

15
When did Darth Vader learn that Luke took part in Leia's rescue from the Death Star?
10
How long did it take the Millennium Falcon to get from Tatooine to the Death Star?
35
Did Obi-Wan ever pay Han Solo? If so, where did he get the money?
1
How did Luke get his lightsaber back after A New Hope?
4
Who follows Obi-Wan Kenobi and Luke Skywalker in Mos Eisley?
18
Did the Empire know the Falcon was going to Alderaan?
10
How did Luke get his lightsaber back from Raynar Thul?
50
Why does Luke draw his blaster instead of his lightsaber to deal with an apparent threat?
7
Did Obi-Wan Kenobi know how to destroy the Death Star without the help of the stolen plans?