What color was the sky above the port in Neuromancer?

Neuromancer, published in '84, famously opens with the line

The sky above the port was the color of television, tuned to a dead channel.

I've always interpreted this to mean "gray", if not literally "TV static snow", because it was what TV sets displayed back then, and also because it fits the mood of the novel. I'm well aware TV sets have changed multiple times the way they display a "dead channel": bright blue (Neil Gaiman jokes about this in Neverwhere, paraphrasing Neuromancer), black with a "no signal" message, going full circle to today's simulated "TV snow".

My question is, what did Gibson actually intend us to see? Like I said, I though it was a gray sky, but a friend told me Gibson was thinking of even older TV sets, from before the first "gray static" era, which displayed... what? Dark blue? Black? Plain gray, without snow? Unfortunately I cannot find any references for my friend's claim.

Note this isn't a question about tech (so answers focusing on the TV tech of the 80s or 60s probably won't answer the question), but about the imagery Gibson was actually trying to evoke. Is there any reference, like an interview, answering this?

According to this reddit transcript of the new audiobook edition, Gibson intended for it to indicate black and white static.

"I actually composed that first image with black and white video static of my childhood in mind, sodium silvery and almost painful, a whopping anachronism right at the very start of my career,in the imaginary future, but an invisible one, interestingly. One that revels a particular grace shared by all imaginary futures as they make their way up the timeline and into the real future where we all must go. The reader never stopped to think that I must have been thinking, however unconsciously, of the texture and color of a signal free channel on a wooden cabinet motorola with fabric covered speakers. Readers compensated for me shouldering an additional share of the imaginative burden and imagined whatever they assumed was the color of static to take on a melancholy of the phrase dead channel."

In Gibson's childhood, a static channel would have looked like this;

Case references the sky again a few pages on, remembering his attempts to cure the mycotoxin damage (emphasis mine).

By day, the bars down Ninsei were shuttered and featureless, the neon dead, the holograms inert, waiting, under the poisoned silver sky.

William Gibson recently quote-retweeted a photo from Monica Lewinsky (yes, that one) which he captions with

Now there’s your color of television, very much as I had it in mind.

Here is the image: 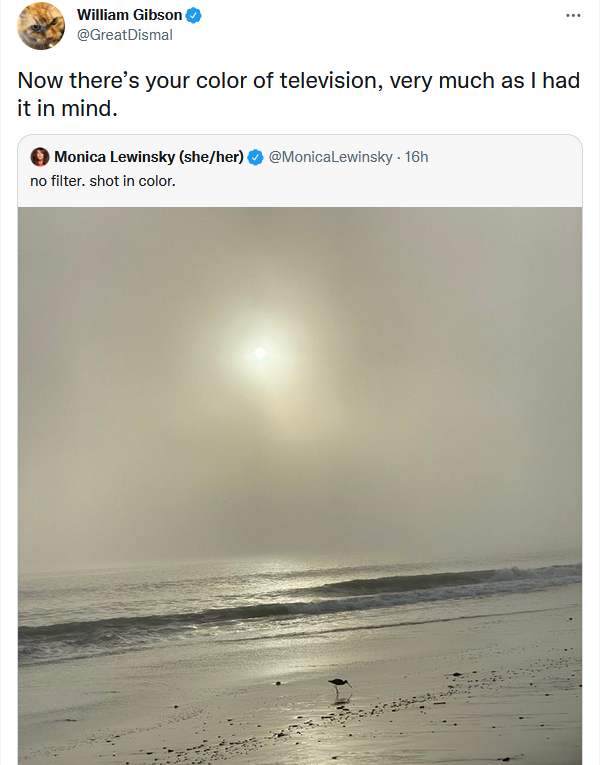 Not the answer you're looking for? Browse other questions tagged neuromancer or ask your own question.