Did Petyr Baelish intend for Lysa to see him kiss Sansa Stark?

In Season 4, Episode 7 of Game of Thrones, Petyr Baelish kisses Sansa Stark after she creates her snow castle of Winterfell. 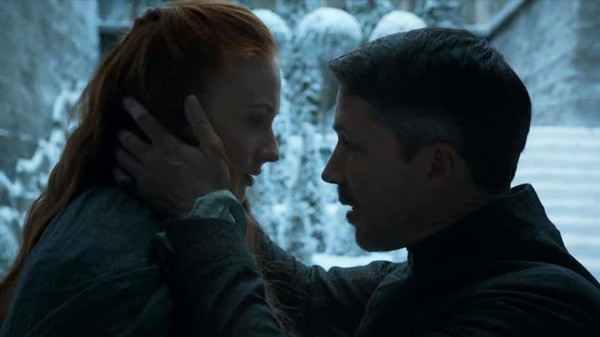 His wife, Lysa goes into a jealous rage and threatens Sansa's life. Lord Baelish then proceeds to throw Lysa out of the moon door to her death.

Did Lord Baelish kiss Sansa to ensure that Lysa would see the kiss and go into a rage? Was this a plan by Lord Baelish to set up Lysa's death?

On the surface it seems unlikely that Petyr could have coordinated the events that happened...

However, this is Petyr "Chaos is a ladder" Baelish, and I have no doubt that it was in his greater plan to remove Lysa from the picture as this would cement his position as Lord of the Eyrie, so let us examine the process...

It does all seems very unlikely, but remember this is the same man who was the catalyst for the downfall of at least three major houses (Arryn, Stark, Baratheon). Having known Lysa since childhood and considering the conspiracy they planned, it is likely Petyr had a good idea of how Lysa would react.

So in the end, an opportunity presented itself, and true to his character Littlefinger seized it for his own ends!

We have no explicit confirmation of this (other than knowing he eventually wanted Lysa dead) even when Littlefinger is opening up about what his long game is. Even the books, which if nothing else can provide clues to motives in the show, offer nothing as Petyr has no POV chapters.

43
What is Petyr Baelish's endgame with Sansa?
13
Why did Petyr Baelish want Ned to send Loras instead of Lord Beric?
10
What seal does Petyr Baelish (Littlefinger) use for his letters?
4
Is Brienne a traitor for pledging fealty to Catelyn Stark? Why did she do it?
7
Why did Lords of Vale swear allegiance to a Northman?
14
What did Ramsay do to Sansa Stark?
11
How could Littlefinger possibly achieve his “endgame” in Game of Thrones?
10
Do we ever find out who sent the catspaw after Bran in the show?