Are the three Legendary Dogs reincarnations of the original three eeveelutions?

I have heard the fan theory that the three 2nd gen legendary dogs (Entei, Raikou and Suicune) are reincarnated from the three original eeveelutions (Vaporeon, Jolteon and Flareon) after the tower burned down.

There are the obvious similarities, such as colour and type. But that doesn't seem like enough evidence. After all, if that were all there was, then it would be just as easy to claim that Entei was reincarnated from a Growlithe (and I'm not saying it is). Is there any more evidence to support this theory?

The most complete story of the three Legendary Beasts (Raikou, Entei, and Suicune) was told in Pokémon Generations episode 6 "The Reawakening". From Bulbapedia's summary:

Eusine looks around and begins recalling how the Brass Tower burned down long ago. It was once a beautiful place deeply admired by the townspeople of Ecruteak City, until it was struck by lightning and was engulfed in flames. Three nameless Pokémon perished in the fire, much to the despair of the townspeople. After the fire went out, a rainbow came down from the sky and Ho-Oh appeared. Ho-Oh used its mystical powers to revive the perished Pokémon into Raikou, Entei and Suicune. The three Legendary beasts appeared on top of the remnants of Brass Tower, leaving the townspeople of Ecruteak City in awe.

The "nameless Pokémon" that became the Legendary Beasts appear like this: 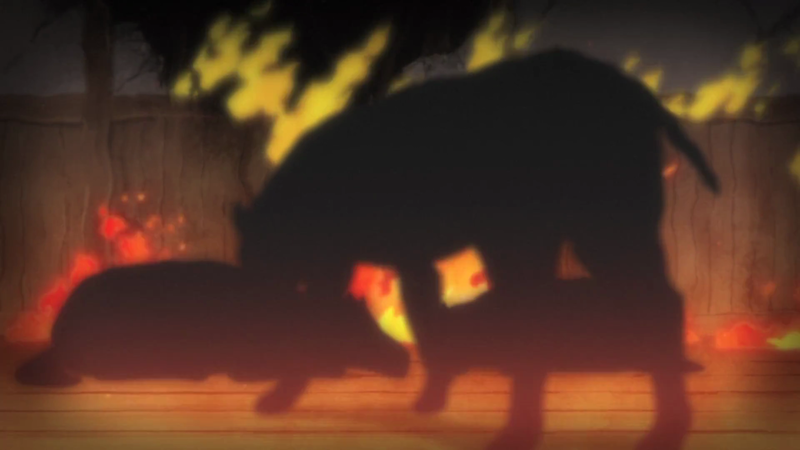 These silhouettes don't match that of any Eevee evolutions or any other Pokémon we've seen so far (to me, they look much closer to a real-world wolf).

Since Pokémon Generations is intended to be much closer to the games than the main anime staring Ash, I think it is closer to being a "definitive" version of the story. Thus it's safe to say that these three are indeed unknown Pokémon and that the theory that they were Eeveelutions is debunked.

I have to disagree with Thunderforge's interpretation of the Generations plot summary:

Ho-Oh used its mystical powers to revive the perished Pokémon into Raikou, Entei and Suicune.

What’s more reliable than Generations are the video games. One of the most crucial links between the Eeveelutions and the legendary beasts in the games is their Hidden Abilities. Raikou has Volt Absorb, Entei has Flash Fire, and Suicune has Water Absorb. Those are the exact abilities of Jolteon, Flareon, and vaporeon. The Kimono Girls that worship Ho-oh also use the Eeveelutions.

This is just my stab here from what I’ve looked into from other sources. I’m not stating that this is fact since Game Freak hasn’t confirmed anything, I just believe there’s enough information to back it up and that I don’t believe it’s been debunked.

16
Who are the Pokémon on the decoration in the Viridian City Pokémon Center?
16
Are there more than one of each Legendary Pokémon in the anime universe?
17
Why was Arcanine with the Legendary Birds in Veridian City in Pokémon Origins?
8
Are the Pokémon anime generations continuations or retcons
1
Are “pocket monsters” more than marketing for the west?
5
Why are the Alolan trial captains so young?