Can anyone help identify an early 2000s science fiction book with a cyborg girl and Jupiter dirigibles?

Looking for the title of a sci-fi book with a character who is a girl that was manipulated genetically or technologically to be able to communicate with an alien species from Jupiter. Her intestines were replaced by the communications device, which was later removed by a doctor who thought it was a kind of parasite. Somewhere along the book, she is addicted to a drug and lives in the ventilation shaft of a spaceship, or maybe just a ship. The contact with the aliens ends up being made by a cyborg man in a dirigible. edit During her infancy/teen years the girl used to like a lake designed as a mandelbrot fractal.

Although it doesn't match everything you mentioned, any chance you a confusing it with The Anvil of Jove by Gregory Benford and Gordon Eklund which you might have read about on this site in the linked answer? 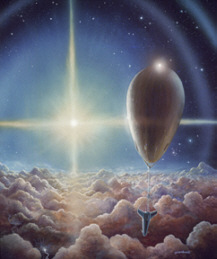 72
What is this painting on the Enterprise showing?