How did Jennifer Keller become infected with the alien pathogen from M2S-445?

In the "Stargate: Atlantis" episode 'The Seed' (S05E02), Dr. Jennifer Keller becomes infected with an alien pathogen that causes her to grow Wraith-like tendrils out of her body. Dr. Carson Beckett determines that the pathogen was developed by Michael on planet M2S-445, and that all surviving team members who visited the planet (Sheppard, Ronon, McKay) also tested positive for the pathogen. The problem with this is that Keller wasn't on that mission, and yet she was the first one to develop symptoms. They even address the fact that it isn't contagious, so Keller couldn't have gotten it by operating on Sheppard, for example.

WOOLSEY: Right now we're working under the assumption that this alien pathogen was present somewhere in that lab, possibly as part of one of Michael's experiments. When the building was destroyed, it was released.

SHEPPARD: We've been back for a month now! If it was going to spread to the general population, it would've already happened.

WOOLSEY: I know. Dr. Beckett is now fairly certain that it's not contagious.

She DID wake up in the lab with some kind of goo on her hand, but where did that come from? They weren't able to recover anything from Michael's lab, so there weren't any sample jars or anything.

How did Jennifer Keller become infected with the alien pathogen from M2S-445?

She was on the rescue team recovering Col. Shepherd and his team from the explosion.

McKAY: Well, it's gotta be something to do with Michael. I mean, she hasn't been offworld since she helped rescue us from that lab.

BECKETT: That's what I was thinking. Of course, if that's where she came in contact with the pathogen ...

As your own quote suggested:

WOOLSEY: Right now we're working under the assumption that this alien pathogen was present somewhere in that lab, possibly as part of one of Michael's experiments. When the building was destroyed, it was released.

The theory was the explosion released the pathogen into the air. Everyone who was on that planet was exposed to it. Not just the people who were on the mission when the explosion happened.

WOOLSEY: This isn't just about Doctor Keller any more. I need to know if this thing's gonna be a threat to the base.

BECKETT (looking up from the tablet): I'd say that's a definite yes.

WOOLSEY: What do you mean?

BECKETT: Colonel Sheppard, Ronon, Rodney -- everyone who was on M2S-445. They all tested positive. Whatever this is, they've all got it.

It's a bit ambiguous because he only specifically names the lead characters, people who were on the initial mission, but it must go beyond them. If it was just those three people who were infected, it would be a tragedy but not necessarily a threat to the base... the problem is that everyone who went to the planet, including the rescue team (which Keller was on) was exposed. 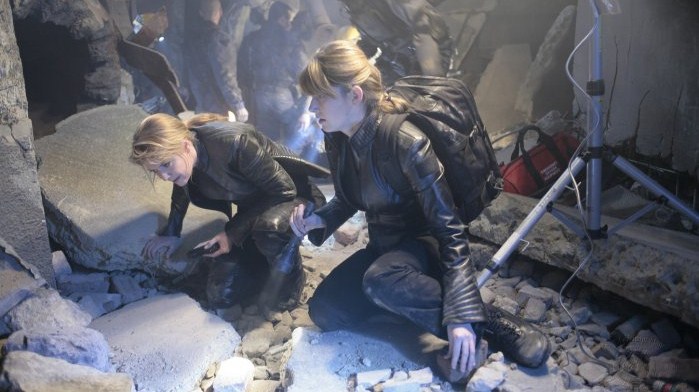 In the above scene, from the previous episode, "Search and Rescue," you can see her there and with all that dusty air you can easily imagine her inhaling some pathogen.

Why was she the first one to show symptoms? It's unclear, but she was working herself very hard, trying to find a cure for Beckett:

WOOLSEY: Now, regarding the situation with our friend in the stasis pod. (He looks at Jennifer.) You seem to have been giving a significant amount of attention to this lately.

KELLER: Well, once we got our hands on Michael's medical research, I thought I should make it a priority to look for a solution.

Also, after the initial rescue, she was likely spending a lot of time taking care of those injured in that episode, while they were recovering and presumably resting more. All of that overwork might have lowered her natural immunity.

Fundamentally, somebody had to be first.

6
How did the first off-world team know the return address for Atlantis?
15
When does the 'Lost City' become Atlantis in Stargate
6
Why not transfer the people of Taranis to the other side of planet?
12
When did it become common knowledge that the Atlantis Expedition were from another galaxy?
8
Where Did the Atlantis Gate Address Come From?
10
Why did the wraith allow Sateda to advance technologically?
5
Did other alien races ascend?
3
How did the Wraith get through the iris in “Midway”?