I have a dim memory of seeing a movie on a TV channel in the USA in or before 1968. My impression is that it was a space travel movie, but I also remember the characters using aqua lung equipment for diving, presumably in an alien ocean. It was in English or dubbed in English and seen on a black and white TV set.

I can't find any "Voyage" or "Journey" "to the End" or "To the Edge" titles that sound plausible made in or before 1968 in the IMDB.

So maybe I just dreamed that movie.

I had an account with Science Fiction and Fantasy Stack Exchange with the name M.A. Golding and user number 43538. Then a few weeks ago someone worked on my computer to make it work better. And then my account seemed to no longer exist.

So I would be grateful if someone could straighten out my account situation.

Could it be Space Probe Taurus from 1965? From IMDb:

In the year 2000 the spaceship Hope One sets off to find new galaxies for colonization. However, an encounter with an alien being and a swarm of meteorites sends the ship streaking off course into a sea of monsters on an uncharted world.

The fatally injured captain of the Faith One rocket asks Earth Control to push the destruct button. The planet they landed on is fatally toxic. They do. Space exploration is fraught with risk. The next mission, Hope One, takes off with the same mission: to seek an earth-like planet. The crew of four include, Hank as captain, John as co-pilot, Paul as old science guy and Lisa as beautiful lady scientist. Hank resents Lisa's presence because he's a chauvinist. Lisa bristles about equality. Hope One encounters an alien craft. Hank and John investigate. It appeared deserted, but a lone big-brain alien appears and attacks Hank. John shoots it dead. The crafts starts getting radio-active, so Hank plants a bomb on it. Blamo. Back en route to Taurus, Hope One encounters the obligatory meteor shower. A shock to the ship makes the computers push full throttle. By the time the crew regain control, they've flown "millions of miles" off course. They find an earth-like planet to land on for repairs, but wind up landing in the ocean. While down there, Hank and Lisa decide each other aren't so bad. Kiss. Hank and John, however, dislike each other. Giant crabs mill around. John dons scuba gear to gather surface samples. On his way back, a reptile man attacks and wounds John. He gets back to Hope One, but dies. His samples prove that man could live on this planet. With the computer repaired, and reactor back online, they can return to earth. After, that is, the giant crabs are shocked into letting go of the ship. Hank calls Earth to report their success. He names the new planet, Andros One, in honor of John. The End.

I saw this movie in the last year and it seems to have a lot of the elements. The spaceship lands in an ocean on an alien planet, and one of the characters uses an aqua lung to swim to to the shore to do some exploring.

The full movie is also available on youtube if you want to go looking.

Fantastic Voyage (1966) is about divers (medical and security personnel) and a submarine, reduced in size and injected into a person's body to treat a brain injury: 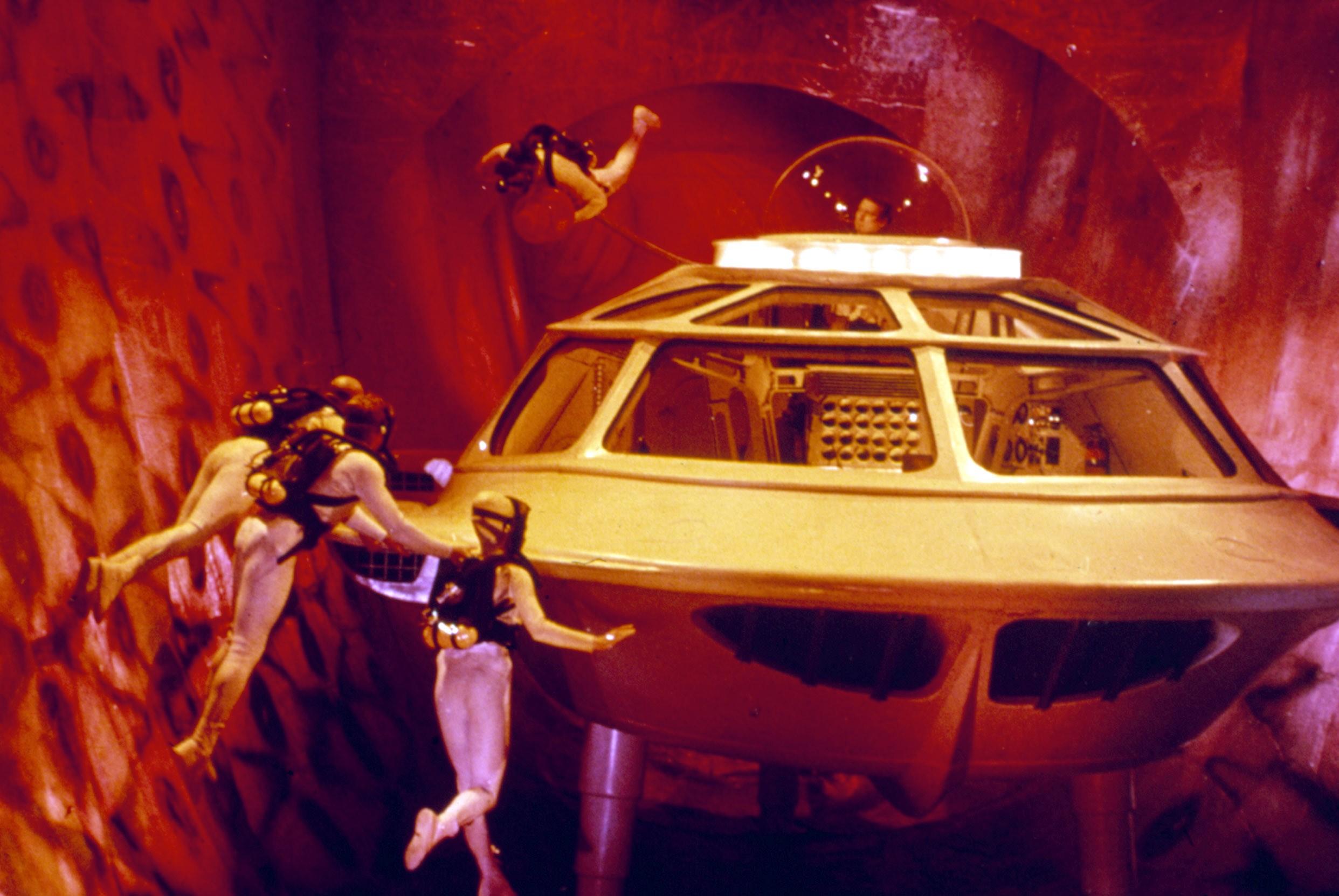 The film's title is similar to the possibilities you've suggested.

From the perspective of the miniaturized team, their surroundings resemble an alien ocean: 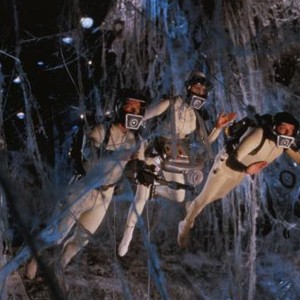 Voyage to the Prehistoric Planet is a 1965 color film, one of two versions adapted for Roger Corman from the Soviet science fiction movie Planeta Bur (Planet of the Storms). This film was syndicated to television by American-International Television Inc in the 60's.

It depicted some underwater scenes:

Not the answer you're looking for? Browse other questions tagged story-identification movie space-exploration or ask your own question.