HP fan-fiction where an Imperiused Dudley jumps off a building

I was reading this very funny Twitter convo where someone finds out that they've actually read a fan-fiction version of Harry Potter and the Order of the Phoenix. It's bloody hilarious, I'm crying from laughing so much! 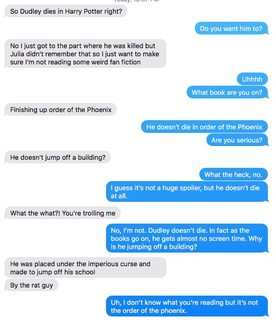 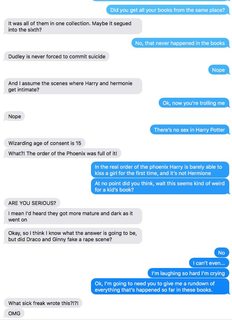 First part:
A: So Dudley dies in Harry Potter right?
B: Do you want him to?
A: No I just got to the part where he was killed but Julia didn't remember that so I just want to make sure I'm not reading some weird fan fiction
B: Uhhhh
B: What book are you on?
A: Finishing up order of the Phoenix
B: He doesn't di in order of the Phoenix
B: Are you serious?
A: He doesn't jump off a building?
B: What the heck, no.
B: I guess it's not a huge spoiler, but he doesn't die at all.
A: What the what?! You're trolling me
B: No, I'm not. Dudley doesn't die. In fact as the books go on, he gets almost no screen time. Why is he jumping off a building?
A: He was placed under the imperious curse and made to jump off his school
A: By the rat guy
B: Uh, I don't know what you're reading but it's not the order of the phoenix.

Second part:
B: Did you get all your books from the same place?
A: It was all of them in one collection. Maybe it segued into the sixth?
B: No, that never happened in the books
A: Dudley is never forced to commit suicide
B: Nope
A: And I assume the scenes where Harry and hermione get intimate?
B: Ok, now you're trolling me
A: Nope
B: There's no sex in Harry Potter
A: Wizarding age of consent is 15
A: What?! The order of the Phoenix was full of it!
B: In the real order of the phoenix Harry is barely able to kiss a girl for the first time, and it's not Hermione
B: At no point did you think, wait this seems kind of weird for a kid's book?
A: ARE YOU SERIOUS?
A: I mean I'd heard they got more mature and dark as it went on
A: Okay, so I think I know what the answer is going to be, but did Draco and Ginny fake a rape scene?
B: No
B: I can't even...
B: I'm laughing so hard I'm crying
B: Ok, I'm going to need you to give me a rundown of everything that's happened so far in these books.
A: What sick freak wrote this?!?!
A: OMG

What Harry Potter Fan-fic is that?

Alternate Harry's 5th yr. He gets a snake who has the Sight. Romantic entanglements, Animagus training, house-elf liberation, giants, Snape's Pensieve and more!

There is a tweet of the SMS conversation here: 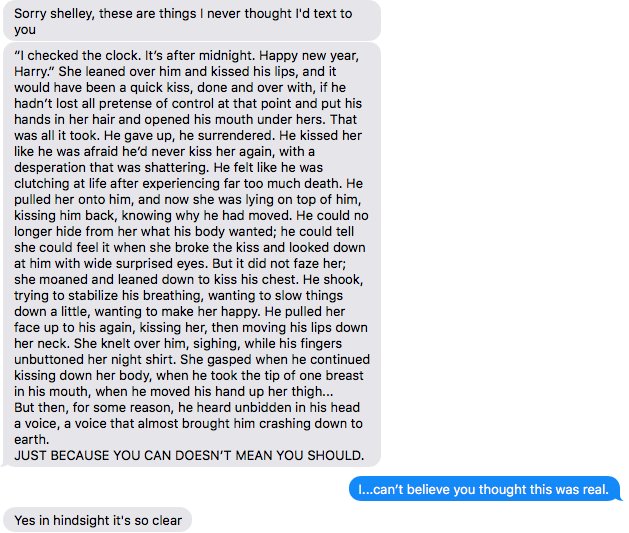 Which is taken from chapter 20, "Dark Deeds"

Then Harry was crying freely as he leaned against the door and thought, If only I'd read it yesterday! If he had, he could have alerted Dumbledore and Sirius to the danger Dudley could be in, Sirius could have Apparated to Dudley's school, found Wormtail, kept him from putting Imperius on Dudley...

Dudley dies by jumping off a building:

He frowned at Harry. "Not me, Harry. Wormtail. He turned up at Smeltings. One of the teachers started keeping him as a pet, or some such thing, and then he was able to get at Dudley..." Harry's heart was in his throat. "What happened?" Dumbledore looked at Harry levelly. "He jumped off the roof of his dormitory. This morning. It looked like a suicide. We think he was under Imperius. Wormtail may be the one who put the curse on him. He's dead, Harry." Tears prickled against his eyelids. "What? But—but we'd just become friends! He—he was all right, it turned out...we were writing to each other regularly..." "And he never mentioned this rat with the silver paw?" Dumbledore wanted to know. Harry shook his head.

Harry gets a snake called Cassandra:

Well," Harry said again, "my name is Harry Potter. It's what people call you..." he trailed off, unable to put the concept of names into words. "I thought you were called 'lazy git,'" said the snake. Harry realized she had heard his aunt addressing him. "No, no, that's not the same as my name. That's called an insult. It's to be mean. Let's see, you predicted the future and I didn't believe you, so I'll name you—Cassandra."

It has the Sight:

"If you have the Sight," Harry said to her, "tell me: will Voldemort be stopped?" "Who?" the snake hissed. "You do not understand. I can only see a few minutes into the future, and only what is right around me. I cannot predict events happening far away. And I get only a glimpse of the future; the larger a snake is the further into the future her sight reaches, and the farther distant."

Not the answer you're looking for? Browse other questions tagged story-identification harry-potter fan-fiction or ask your own question.

41
What happened to Umbridge when she was carried into the forest by the centaurs?
37
What did Dudley hear when attacked by the Dementors?
23
What's with the Nigel character?
2
Effects of Legilimency used on someone
5
Harry Potter Fanfic where Harry is impregnated by Draco