From what distance can Sting detect Orcs or Goblins?

Having re-watched the Hobbit and LoTR trilogies recently and I wondered if there was any evidence in any of Tolkien's writings as to the what is the greatest range at which Sting (and other elven blades) can detect Orcs or Goblins?

In the Hobbit when Bilbo is watching Gollum kill the Goblin, Bilbo is some distance away judging from the size of Gollum on the rock, and Sting stops glowing when the goblin dies, this seems to be about 40m. Is there any known range that Tolkien provided for the enchantment?

This question asks about the frequency of updates which is similar but there isn't an answer regarding range.

Apparently about a kilometre away

In The Two Towers, Sting "gleamed dimly at the edges" while the Fellowship camped at Parth Galen. Aragorn suspected Orcs to be either on Amon Lhaw or Amon Hen.

Nonetheless as the night wore on Aragorn grew uneasy, tossing often in his sleep and waking. In the small hours he got up and came to Frodo, whose turn it was to watch.

'Why are you waking?' asked Frodo. 'It is not your watch.'

'I do not know,' answered Aragorn; 'but a shadow and a threat has been growing in my sleep. It would be well to draw your sword.'

'Let us see what Sting may show,' answered Aragorn.

Frodo then drew the elf-blade from its sheath. To his dismay the edges gleamed dimly in the night. 'Orcs!' he said. 'Not very near, and yet too near, it seems.'

'I feared as much,' said Aragorn. 'But maybe they are not on this side of the River. The light of Sting is faint, and it may point to no more than spies of Mordor roaming on the slopes of Amon Lhaw. I have never heard before of Orcs upon Amon Hen. Yet who knows what may happen in these evil days, now that Minas Tirith no longer holds secure the passages of Anduin. We must go warily tomorrow.'

From The Atlas of Middle-earth, which is a reputable source for maps on Tolkien's Legendarium. 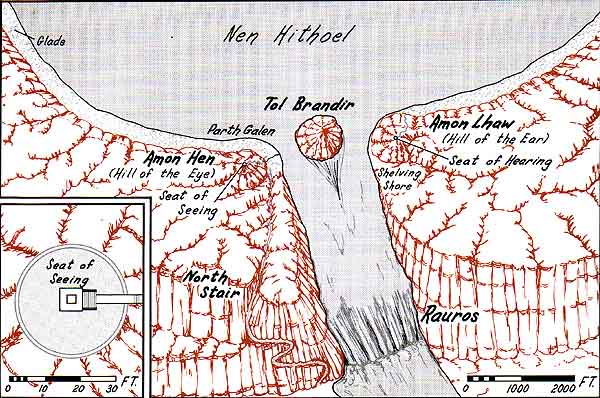 Depending on whether you want to take Aragorn's word for it, Sting seems to detect Orcs at 762-1066 metres -- about a kilometre away (Amon Lhaw from Parth Galen, not inclusive of altitude).

As the Sting glows brighter as the Orcs/Goblins approach, and dimmer as they move away, it is a matter of the user perception whether the sword glows, or is it a trick of light.

There is no calculateable distance. It can be calculated for different cases, and we can make a guess. But Tolkien used it as a plot device.

Voronwë's answer is but one of three cases, claiming that as the canonical answer is bad scientific practice.

There were three occasions were Sting was observed to have glowed in the presence of orcs.

In the Goblin caves after Bilbo is dropped the first time he sees his glowing sword.

Now he drew it out. It shone pale and dim before his eyes. “So it is an elvish blade, too,” he thought; “and goblins are not very near, and yet not far enough."

This doesn't give us an accurate description of how far away they were. So we'll have to look at another example.

The next mention of the sword glowing is just before Bilbo was lead down the passages by Gollum. This doesn't give us a good indication as the orcs could be 20m away or they could be over a thousand meters away.

So lets look at Frodo in the Mines of Moria

Another harsh horn-call and shrill cries rang out. Feet were coming down the corridor. There was a ring and clatter as the Company drew their swords. Glamdring shone with a pale light, and Sting glinted at the edges.

This is the same description as before. This gives us some idea of how far away the orcs may have been. A description of the size of Moria is give here.

As for the corridor outside the Chamber of Mazarbul, I wouldn't predict it to be extremely long, as what would be the point of a single corridor that's extremely long. I would say it could be anywhere up to a maximum of a couple hundred meters. But definitely no where near to a kilometre away.

This leaves us with the final case

As outlined in Voronwë's answer. He claims it to be 1000m. I say this is grossly wrong because the orcs were not near Amon Lhaw. They were near Amon Hen. As that is where the Fellowship got attacked. The Orcs were definitely far closer putting them again (according to Voronwë's maths) at around at most 1700 feet, ~500 metres.

I don't think there was a canonical distance, it was really up to Tolkien to use it as a plot device.

64
How large was Khazad-dûm?
11
How fast does information about the presence of orcs/goblins reach "Sting"?
5
How was the Atlas of Middle-earth measured and scaled?
-1
Can anything reduce Sting's detection ability?

44
What is the ‘babelfish effect’ when Bilbo puts on the Ring and understands the spiders?
10
How did Bilbo Baggins find the One Ring exactly?
2
Why is Gollum's memory so selective?
10
Do all elven blades glow blue in the presence of orcs?
11
How fast does information about the presence of orcs/goblins reach "Sting"?
8
How did Gollum know that Sting was an elvish blade?
11
Why did the Elves only create 3 blades that could glow blue?