Manga/anime/game: protagonist suffered accident that made him see monsters except for one girl

I’m trying to identify a manga/anime/game/comic, these are the clues:

Fuminori Sakisaka is a young medical student whose life completely changes when he is involved in a car accident along with his parents, killing them and heavily wounding him, leaving him with a brain disorder, which symptoms manifest as an exaggerated form of agnosia, that causes him to see the world as covered in gore and people as hideous monsters. As he contemplates suicide in the hospital, he soon meets someone named Saya, who he sees as a beautiful young girl.... Due to their circumstances, Fuminori and Saya become close and move in together, eventually becoming lovers and incredibly dependent on one another.

However the girl is the monster, and since the protagonist sees the world as monstrous, including ordinary humans, he gets depressed by it until the appearance of Saya the only 'human' looking creature.

He falls in love with Saya, and is even willing to kill other human beings for her. She is, in fact, a monster with tentacles, an escaped experiment by some scientist, who eats human beings. 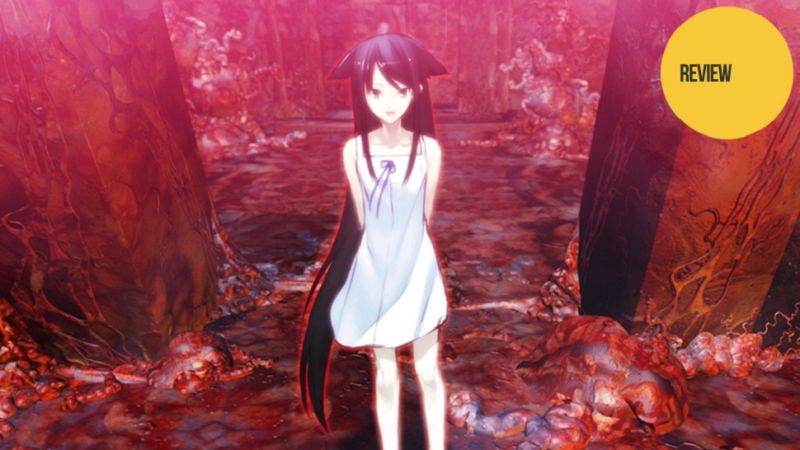 Not the answer you're looking for? Browse other questions tagged story-identification anime video-games manga or ask your own question.

9
Anime where man is crossing the street. Saved from an accident by someone who knew him in a past life (as a girl)
8
Anime movie: kid is so good at VR game that government tries to recruit him
9
Sci-fi manga about a boy with an alien girl classmate
4
Anime about a gifted blond girl joining a department that hunts monsters
13
An animated sci-fi movie with a fully armoured antagonist and a pale looking child
9
Anime about boy & summoning monsters
2
Anime that has pendant/necklace that transform to monsters, he has a pendant to a green one that has wings that fuse with him
6
Isekai manga - protagonist repeatedly re-enters the fantasy world, time passes more quickly there
3
Manga/webtoon where the protagonist has eyes that warn him of things using colours; his emotions were sent back to his younger self