I'm having trouble identifying a cartoon movie I watched as a kid. It was about a boy who could travel in time and, after exploring many different eras, he goes to the future and discover our society is gone and humanoid creatures now inhabit the earth in a tribal-like culture.

Every day they pray in a circle so food would spawn in a certain point while some of those praying would be absorbed by the ground. The boy asks one of this humanoids critters and they tell them this is normal and necessary. The boy then discovers a huge structure under the ground that is absorbing this critters and using their life power to power machines, and in trade they offer the critters food, so they would not fight against this system, even though the critters themselves were unaware of what was happening and simply accepted they had to be "absorbed".

My guess is that this movie may be around 15 years old, I watched it in portuguese and the translated title was something among the lines of "O Garoto da Maquina do tempo" (the boy of the time machine) but I don't get a single coherent Google result when I try searching it.

Is it possible you're thinking of Time Kid? It was a 2002-2003 (the figures I've found are ambiguous) loose adaptation of H.G. Well's classic novel. 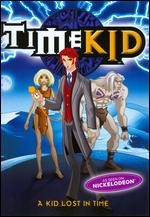 ... he meets a strange race of people- the Luman, who are a very simple, almost childlike folk who live in a domed community. They also have telekinetic powers. When Tom wonders where the food comes from, he discovers that it is provided by a second race, the Sub-Men. When the Luman come to get their food, the Sub-Men take a Luman in exchange.

It seems that the Sub-Men are using electrical energy from the Luman's telekinetic powers to run their machines...

You can find a more extensive review here which mentions that the Luman are indeed pulled into the ground.

Tom goes with the group and watches them hold hands and circle a table covered in bread.

Something grabs one of the boys and he is dragged under the sand as everyone grabs the food and pretends nothing is happening.

Tom digs in the sand and finds a manhole, going down it to find the Submen have been feeding the Lumen in exchange for one of them each time to power their machines.

Not the answer you're looking for? Browse other questions tagged story-identification movie time-travel cartoon or ask your own question.

13
Movie about a man and a woman accelerated in time. The rest of the world was suspended in time
7
1980s fantasy movie - Teen boy goes on quest
10
Looking for name of sci-fi/horror movie about alien disguised as father
9
Old 90's cartoon about a boy who could stop time
9
Animated movie about a boy, a girl traveling through time and space in a ship called “The Tempest Fugit”
16
Chinese-language movie about an alien boy with the ability to grant wishes
44
Movie where a boy is transported into the future by an alien spaceship