Are probes loaded and launched manually or automatically in Starfleet vessels?

Many times we see the Captain of a Starfleet vessel ask for a probe to be launched in order to scan/examine some debris/star/anomaly/planet etc. Then a member of the crew, usually at the science or tactical stations, press a few buttons on their panels and moments later the probe is launched.

However, we never see what happens from the moment the crew "orders" the probe (by entering some command in the panel) and the launch itself. Does the command get forwarded to some crewmen in the lower decks who are responsible for maintaining the probes, who then load them and proceed with the launch or does the whole thing happen "automagically"?

So, my question is: are these probes loaded and launched manually or automatically in Starfleet vessels?

I'm only interested in the TNG era (TNG/DS9/VOY) and in both canon and expanded universe.

The TNG Technical Manual indicates that standard probes are stored in the vicinity of the launcher for immediate use. Since the probes have to be loaded into the launch elevator (and are then ejected by the ship through the probe port via magnetic acceleration) it stands to reason that they have to be loaded manually by dedicated crews.

The following section lists the specifications of each class. The higher class numbers are not intended to imply greater capabilities, but rather different options available to the command crew when ordering a probe launch. General use probes readied for immediate launching are stored adjacent to the photon torpedo reactant loading area on Deck 25. Other standby probes are stored on Deck 26 on standard torpedo transfer pallets. All probes are accessible to Engineering crews for periodic status checks and modifications for unique applications.

A diagram is provided to help you visualise the chain of events. 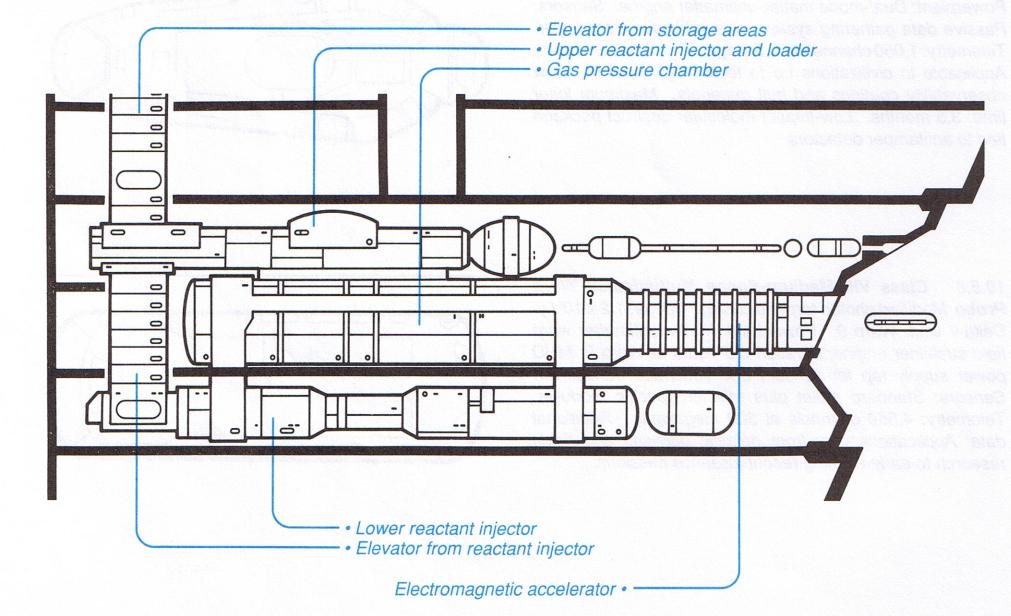 In addition to sensors, Galaxy-class ships were equipped with a variety of probes and scientific devices that could be launched from the torpedo launchers. These included basic scanner probes and reconnaissance probes, class-A probes and probes from class-1 to class-5. (TNG: "Where Silence Has Lease", "Force of Nature", "Ship in a Bottle", "Chain of Command, Part I")

There was a standard compliment of probes on Starfleet ships, which could be fired easily (and interchangeably) through the torpedo tubes. On some instances, however, a probe would have to be modified from its "stock" configuration before it could be launched.

When the preliminary readings were inconclusive, and Data couldn't detect abnormalities in Gamma Arigulon's radiant energy, Captain Jean-Luc Picard gave the order to prepare two class-1 probes. However, before the probes were launched, a Klingon attack cruiser de-cloaked, and the captain stopped the launch. (TNG: "Reunion")

Some probes used by Starfleet were modified photon torpedo casings with extended sensor equipment and no warhead. (TNG: "The Emissary"; Star Trek Generations)

As to the process of launching the probe (Memory Alpha... again):

Tubes could be controlled from the bridge or from the torpedo bay. (ENT: "Silent Enemy")

This would apply for "stock" torpedoes and probes which would be loaded and prepped automatically.

From You Know Where:

3
In "Course: Oblivion", why did Voyager not find the probe?