Movie about a dark city and a suicidal artist

I am looking for a movie – I must have watched it roughly five years ago. Sadly, I only remember fragments and it’s been driving me nuts…

The setting was both modern time and a strange ‘dark city’ and the genre was some kind of magical realism. Very dark and melancholy.

One of the protagonists lived both in the real world, but kept going to the ‘dark city’, which was highly stylized and very steampunky/dystopian. Over there, he was kind of a hero (I think); he kept fighting against agents of the city’s government. I think it was left ambiguous whether this is just his fantasy or whether this world truly exists, but I am not sure.

The other protagonist was a woman in the real world, an artist who repeatedly attempts suicide after setting up cameras and films the paramedics rescuing her.

Over the course of the movie they meet and form a connection/help each other cope with the world.

This is Franklyn, a 2008 British science fantasy film written and directed by Gerald McMorrow. 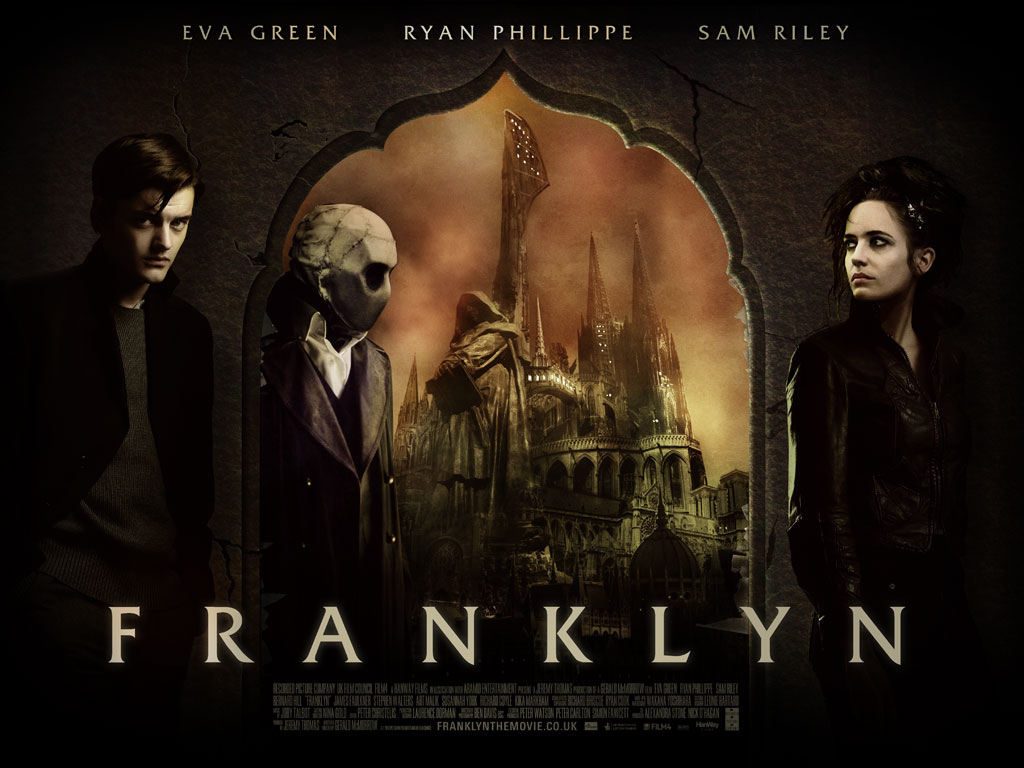 FRANKLYN is a tale of four very non-connected people being tugged in by that ever-so-invisible fishing line we’re all being reeled in by: Fate. Layered on top of this drama is an action-packed meta-narrative taking place in an abstract alternate world: “Meanwhile City”, a Metropolis-styled Florence with shades of Gotham City, populated claustraphobically with zealots in clothes that could only have been designed by Jim Henson and Tim Burton tripping together acid tabs. In that sense, it sort of plays out like 21 Grams in terms of character and narrative, with the aesthetic sidelines of Dark City-meets-Watchmen. Granted, FRANKLYN was released before the Watchmen film, but it’s safe to say one character was at least texturally inspired by its nihilistic narrator in the squidgy mask.

Does this mix of human drama and otherworld comic-babble work? Well, yes and no. Not 100%. Our four characters each have their own (and I must stress- VERY SEPARATE) narrative strands dealing with the themes of loss, perceptions of reality, faith, and fate. In terms of loss and perception it succeeds on so many levels, but by adding the extra non-Meanwhile characters into the mix, the final product is a little unbalanced. However it’s still one hell of a trip to Disneyland, a remarkable interlude of events that almost feels vacation-like in comparison to the hum-drumness of modern-day emotional disorders.

That’s not to say in the least that the other characters are dull, they merit fascination on their own levels . In London, Eva Green plays Emelia (and another character, but we’ll stick to this), a college art student who’s thesis is filming her own suicide attempts, setting up the situations so paramedics have ample time to pick her up before she knocks on heaven’s door. Her dangerous project is somehow connected to childhood resentments towards her father and mother, which is only briefly examined.

MEANWHILE, going fist-to-cuffs against Authority in a brown leather trench coat, Ryan Phillipe plays our masked vigilante, John Preest, on a mission against God. But is his vengeful mission real or in his head? In a fantastic use of cinematic distortion, Preest is never in London, occupying only the world he aesthetically belongs to. As he never is shown physically crossing over into contemporary London, the question grows: Which reality is real, or more importantly, more pertinent?

24
1980s movie/series on PBS about a man & his psychiatrist in a post-apocalyptic world
19
90s movie about people confined to the dark side of a 'half earth'?
13
A dark French movie about a little girl, a big guy, and a mad scientist
8
What animated movie had reptilian aliens attacking a city surrounded by a force field?
14
Movie about astronauts returning to a post-apocalyptic Earth and starting to fight each other
11
Black-and-White Sci-Fi Movie with Cone-shaped Aliens
9
B-class sci-fi movie about postapocalyptic group of soldiers moving from outpost to outpost, with some of them being cyborgs (or diseased?)
7
Movie about a rogue / martial artist brought to the present, rides a scooter at some point?