Does Geordi have more than one VISOR?

Near the end of the episode A Matter of Time, we see a tray of items including Geordi's VISOR. However, Geordi spends half the episode on the surface of the planet and is clearly still wearing his VISOR at the time. 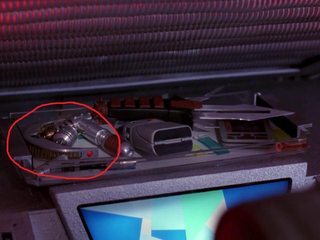 Was this a production oversight or does Geordi have more than one VISOR? I don't see why he would need more than one, unless he keeps older models around (the flashback in TNG: Identity Crisis showed that he has had multiple versions over the years).

Per the original screenplay, Geordi owns more than one VISOR.

[Normally slid into a rack, the trays are exposed and filled with objects stolen from the Enterprise: two tricorders, a neural stimulator, a hypospray and bioscanner, one of Geordi's visors, PADDS, a small desk top viewer, a Klingon knife, piles of isolinear chips and other computer chips, palm beacons, even bar glasses and silverware from Ten Forward, and various other whatsits from here and there. Data examines the loot and turns to Rasmussen.]

As to why he has more than one, I think we can safely assume that if he decides to self-maintain his VISOR, he'll need the ability to see when doing so.

It is never stated that he has only one visor. Given that in the referenced episode, he clearly still has a visor, it seems reasonable to assume that this is evidence of him having at least two.

Frankly, it would be unusual to only have one instance of a piece of portable technology that you require to function. Most people with glasses today have at least a backup pair, which might not be as good (old prescription, damaged, etc) but will work in a pinch until they can get something new. Given Geordi's critical role as Chief Engineer, it would be irresponsible for him not to have a backup in case his main visor broke or was stolen.

Yes, I know there are worse cases of irresponsibility in Star Trek, but I'm sticking with my argument.

23
Why is Geordi the only guy with a visor?
14
Was there anything Geordi could have done to avoid the visor hacking?
14
Shouldn't Geordi have been able to see the heat signatures of the 'Invisible' aliens?
7
Why does Geordi La Forge's VISOR see a wide subspace spectrum and not just visible light?
13
How does Geordi LaForge's visor work?
11
How much did transporter risk decline over time?
17
Was the use of Klingon ships by Romulans ever given an off screen explanation?
9
When Geordi was invisible in Identity Crisis, why did his eyes work?
21
Which VISOR does LeVar Burton own?