Is Elrond Only Half-Elvish? [duplicate]

In The Hobbit by JRR Tolkien, Rivendell, a city of elves, is ruled by Elrond. The party of adventurers are waylaid there until Midsummers Eve, but I noticed a small passage about Elrond.

The master of the house was an elf-friend - one of those people whose fathers came into the strange stories before the beginning of History, the wars of the evil goblins and the elves and the first men in the North. In those days of our tale there were still some people who had both elves and heroes of the North for ancestors, and Elrond the master of the house was their chief.

I know Elrond was sometimes called the 'half-elven'(as was pointed out in this question, and normally that would be that, but he appears fully elvish. For example, he appears to have an incredibly long life, as is evidenced by the above passage, and he noted his inability to act as the Elvish emissary in the Fellowship, because of his age and inability to leave, rather than because he was not fully Elvish. So, is he fully Elvish?

Better to say, really partially-elven rather than half. From the Wikipedia:

Elrond was the son of Eärendil and Elwing, and a great-grandson of Lúthien, born in Beleriand in the First Age, making him well over 6,000 years old by the time of the events described in The Lord of the Rings. Elrond's twin brother was Elros Tar-Minyatur, the first High King of Númenor.

Although Elrond was considered half-elven, that was not meant to be an exact percentage value. Through Lúthien, daughter of Melian the Maia, he and his brother Elros were also descended from the Maiar, angelic beings who had come to Middle-earth thousands of years before. Both his mother and his father had mixed human-elf ancestry, and as a result Elrond himself was 6/16 human, 9/16 elf and 1/16 Maia. Elrond, along with his parents, his brother, and his children, were granted a choice between Elven or human fates by the Valar. Elrond chose to live as an immortal Elf, while his twin Elros chose the mortality of Men.

No, he's most definitely not fully elvish.

This family tree sums it up perfectly: 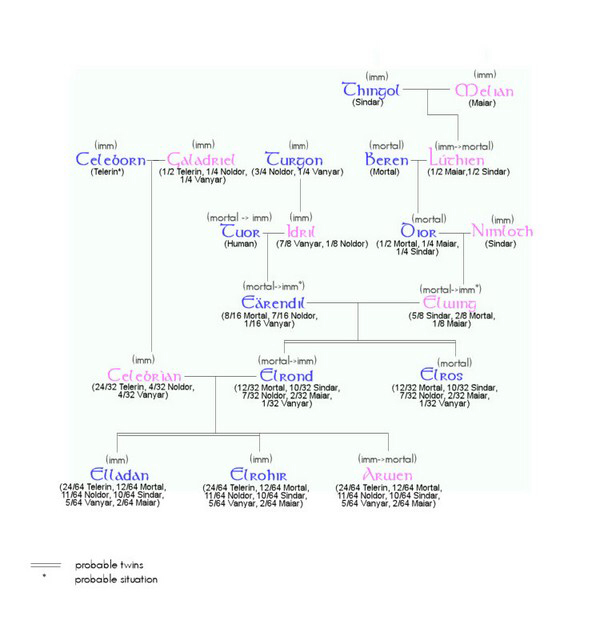 So he's 12/32 mortal (Men) and 2/32 Maiar. The remaining percentage goes to his elvish ancestry -- Noldor, Sindar and Vanyar.

The term Half-elvish just means that he's descended from both Men and Elves. The surviving Half-elven of the First Age were given a choice: to become immortal, as an Elf; or mortal, as a Man. Elrond chose the former choice, and therefore you could call him an Elven Half-elven.

29
Was Elrond always supposed to be an Elf?
19
How does interspecies reproduction work in the Lord of the Rings universe?
11
Did Elrond Half-Elven have any title?

79
Why did all the Ringbearers leave Middle-earth in the end?
9
Were Elladan and Elrohir afraid of the dead?
57
Was Elrond, in Tolkien's opinion, more inherently powerful than Galadriel?
11
Did Elrond Half-Elven have any title?
29
Was Elrond always supposed to be an Elf?
6
At Elrond's Council, why were the Elves so worried about being cut off from Grey Havens?
96
Why didn't Frodo take a map with him?
7
Did the Kings of Gondor remember their ancient kinship with Elrond?
39
Why couldn't Aragorn become one of the Eldar?