My recollection is that it had colonists that lived in a wooden stockade for protection against non-sentient dinosaur-like predators native to the planet.
They were also facing invasion from aliens that had the capability to merge consciousness with humans they have captured (I think there was one alien that had merged consciousness with a Chinese human). 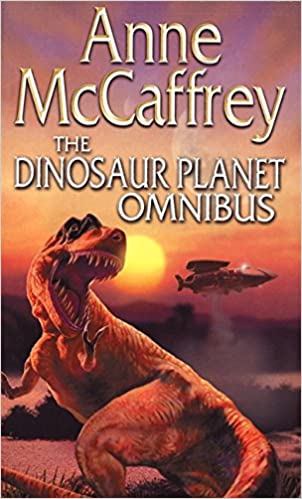 DINOSAUR PLANET: On Earth they had died out 70 million years ago. But on Ireta they ruled in all their bizarre splendour. The Dinosaurs. Relics from a forgotten age, they roamed a planet as mystifying as any in the galaxy. And the expedition sent to explore it was trapped within its toils as quickly and mysteriously as their relief ship disappeared. And worse. For the Heavyworlders, half the expedition's personnel, reverted to type, and as predatory carnivores systematically hunted down their colleagues. Only the frozen sleep of cryogenics offered an escape. But for how long? SURVIVORS: Much time has elapsed - how much is hard to tell, but at least two generations - and the survivors emerge from their hibernation. Ireta, the Dinosaur Planet, has changed. A rescue ship is on its way, but even as hope begins to spring, new problems arise. What are the motives of the mysterious Theks? Above all, what could possibly be the cause of the mindless hostility of the Heavyworlders.
-From Amazon

Not the answer you're looking for? Browse other questions tagged story-identification books aliens space dinosaurs or ask your own question.

10
Does anyone know the book “The Eagle Flies Over England”?
8
Identify novel featuring aliens living in a spiral building on a colony world
4
Book like Time Safari with invisible and sentient dinosaurs
17
Teen girl named “Leaf” or “Twig” who grew up in wild of forest planet raised by “Grandfather”(forest's plant root nexus). Colonists out to destroy him
30
Novel involving a sentient AI, alien hogs, and a Chinese colony governed by OCD