Found this website that looked like an archive of someone's work; it was essentially an encyclopedia, organized in chronological order, of transhuman "species" as they developed. It takes a twisted turn when the solar system is invaded, and the aliens further bioengineer (to the point of unrecognizability) these populations, sometimes for pragmatic reasons (using humans as tools,) to engineer pets and vanity creatures, and some out of sheer spite-- one population is transformed into a living mat that covers the floor of a sanitation system, turning them into a self-aware sewage treatment system.

Most of the populations are no longer sapient, the intelligence cut out of them. There might have been a second alien invasion described later in the entries as well. There are no protagonists, and there's a good chance the "story" covers millenia? I only skimmed it the first time I read it, but there were some interesting ideas.

PS: the whole thing was illustrated. disturbingly illustrated. To expand on this, the illustration looked like woodcuts, and the figures depicted were usually naked and grotesque, with features so exagerated it bordered on charicature.

The site itself looked old (basic html webpages?) even though I had found it only in the last couple years. It's very possible the site was webarchive of a published book, but I can't be sure.

Other species may have included:

More to come if I can think of them.

All Tomorrows, by Nemo Ramjet

This is definitely the future history you've described. The collection of basic web pages is heavily — and, as you say, disturbingly — illustrated: 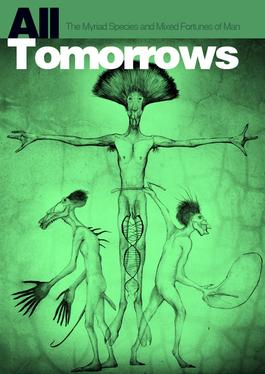 It covers the billion-year speciation of humanity and the lingering effects of humanity's sculpting by aliens:

All Tomorrows is a science fiction novel written and illustrated by the Turkish artist C. M. Kosemen, under the pen name Nemo Ramjet. It tells the journey of the evolution of human race over the next billion years, counting from the date man colonized the solar system, to their galactic dominance and ultimate disappearance.

The Qu manipulate human DNA and revert the Star People to animal status. Some of the new post-human species eventually evolve sentience again, only to fall prey to sentient machines developed by one of them. The machines are however defeated by the Astromorphs – descendants of Star People who escaped the Qu into interstellar space and developed enormous brains, such as are possible only in a weightless environment. A galactic utopia follows until all the post-human civilizations mysteriously disappear.

You mentioned "one population is transformed into a living mat that covers the floor of a sanitation system, turning them into a self-aware sewage treatment system." These are the Colonials:

So they were made into disembodied cultures of skin and muscle, connected by a skimpy network of the most basic nerves. They were employed as living filtering devices, subsisting on the waste products of Qu civilization like mats of cancer cells. And just to witness and suffer their wretched fate, their eyes, together with their consciousness, were retained.

The text of All Tomorrows does not include its publication date. The earliest cache on The Internet Archive is from April 30, 2011, Wikipedia and Goodreads list the publication date as 2008, and the earliest date in the EXIF data of the cover image (shown above) is January 1, 2002.

Not the answer you're looking for? Browse other questions tagged story-identification post-apocalyptic alien-invasion transhuman or ask your own question.