If I remember right, it is a series of 7, and can't have been originally published before 2010 or earlier because that's when I read it.

Story consists of a big tree character near the end, the story plays with time if I remember correctly, (time travel or alternate universe etc.) and the main character is a young boy.

Main character of a young boy, semi-scientific exploration of fairies and goblins, at least 7 books, sounds like the Artemis Fowl series by Eoin Colfer.

A teenage genius, Artemis captures Holly Short, who is a Fairy and a captain of the LEPrecon (Lower Elements Police Recon), in the first book and holds her for ransom to exploit the magical Fairy People and restore his family's fortune. In the sequel, Artemis Fowl: The Arctic Incident, he allies with the Fairies to rescue his father from the Russian Mafia. The series introduces Artemis as an anti-hero and the fairies' enemy, but as the series progresses, he assists the Fairies in resolving conflicts with worldwide ramifications, with Artemis's character developing and changing throughout the chronology. The series concluded with Artemis Fowl: The Last Guardian, released July 2012. 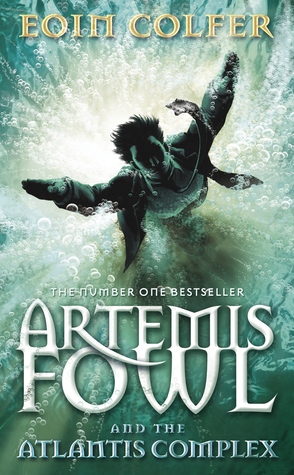 On Vatnajökull, a glacier in Iceland, Artemis unveils the Ice Cube, his invention to stop global warming (by shooting reflective nano wafers into the clouds, and having them rain down with the snow, and when they land, they reflect the sun's light and insulate the icebergs), to Captain Holly Short, Foaly, and Wing Commander Vinyáya. Artemis counts his words, and Holly and Foaly conclude that he has Atlantis Complex, a psychological fairy disease with symptoms including OCD, paranoia, and dissociative identity disorder. Artemis's scans pick up a UFO. Foaly confirms the scans, and Artemis suddenly mentally snaps, accusing Foaly of trying to steal his invention. Holly tries mesmerizing him, but they are attacked by a mysterious spacecraft that Foaly designed to search for life on Mars. The craft crash lands, hits a shuttle, and instantly kills Commander Vinyáya and all LEP backup, leaving Holly, Foaly and Artemis stranded on the glacier without communications or weapons.

The sixth book, Artemis Fowl: The Time Paradox does involve time travel. I do not see a "tree person" in the plots, but "Turnball Root", an elf, is the primary antagonist of the seventh book. Also not quite matching are the diagrams. As far as I know, the Artemis Fowl books were not illustrated, although a series of graphic novels was published covering the first four books, and The Artemis Fowl Files, a guide to the story's universe, does have diagrams.

Not the answer you're looking for? Browse other questions tagged story-identification illustrated-story or ask your own question.

9
Looking for title of TV series about boy and an alternative world
8
Identify this Dragonlance(?) story with clever use of footnotes
14
Children's/YA book where twins are separated at birth in order to save one from eugenics empire?
10
Children's sci-fi series from 70's/80's with a pink blob as a pet
6
Fantasy novel with a boy on a quest to fulfil a prophecy in a fantasy world with flame fairies
15
Fantasy series - Character has epiphany on mountain
8
Book series where a painter is heir to clan of dragon blooded barbarians
20
Fantasy novel/series with young man who discovers he can use magic that is outlawed
6
Series of novellas about a video game and weird silly putty