Does Joffrey have cousins?

Cersei tells Jaime they're the last of the Lannisters who count. Dumb question: Any nieces/nephews? You know, Joffrey/Tommen/Myrcella have any cousins or something?

Does Joffrey have any cousins? A first cousin? No, he had one, the lady Shireen Baratheon who died. Second and third cousins? Yes he does from his maternal side but they are not discussed extensively in the show. Does Cersei have extended relations? Not that we know of from the Show.

they're the last of the Lannisters who count

Notice the Words who count. Those who count are the senior line of House Lannister i.e. the Line of Tytos Lannister. Of those, only Jaime and Cersei are alive (Tyrion is too but of course as per Cersei, he doesn't count). That doesn't mean they are literally the last of the thousands of year old Lannister dynasty.

Cersei indeed has distant cousins in the senior line, the descendants of Ser Jason Lannister. There is also a cadet dynasty, the Lannisters of Lannisport.

As for her kids having cousins, of course they did. There was Shireen on Baratheon side, who is dead. None on the Lannister side as Jaime and Tyrion never married. There are second cousins of sorts who are listed in the linked answer but from book POV.

The full extended Lannister family as described in the books

You can learn about the extended Lannister family of Casterly Rock here if you are interested, from books POV of course. I could rehash it here but there is no point as I have already written all that there - but these family trees from that answer might give you an overview (If you feel confused by these trees, refer to the linked answer for clarification): 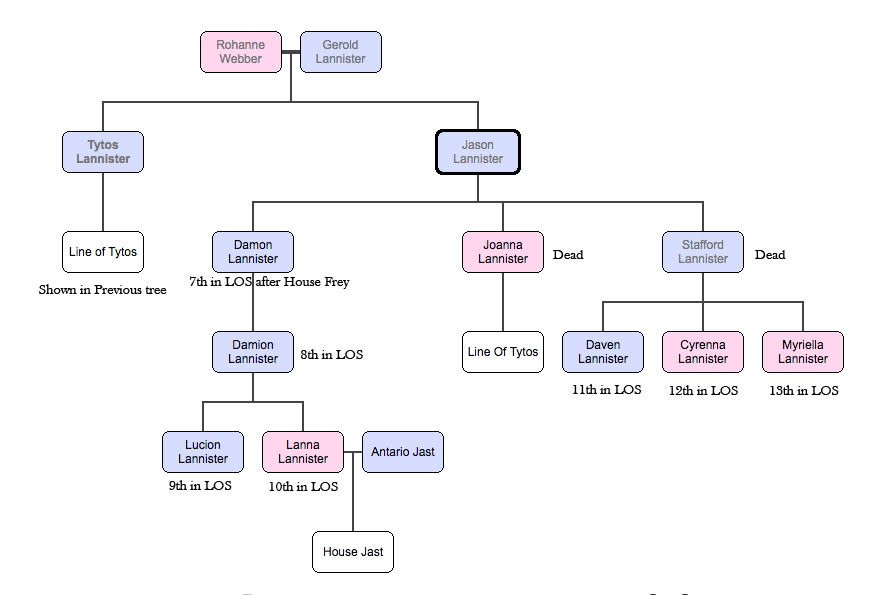 72
Who is now the Lord of Casterly Rock?

39
Who put Joffrey up to what he did at Ned's trial?
9
Is there any evidence to categorically confirm Cersei's children are bastards?
15
Since Joffrey was a minor, why the urgency?
5
What is Renly's basis for removing Joffrey?
10
Does Joffrey ever show incestuous tendencies?
33
In A Clash of Kings, why does Cersei initially oppose marrying Joffrey to Margaery?
5
Did Lyanna Mormont ever ask Jon Snow to return the sword, Longclaw, to her family?
10
Do we ever find out who sent the catspaw after Bran in the show?
5
Why did Stannis kill Renly instead of someone else?