I read this somewhere in the late 80s to early 90s as a hardback book in Ashland, KY. The main character is a boy, but severely jaded. He fights with plastic nunchaku (he makes a point at some point that plastic provides a satisfying impact without causing as much lasting injury) as part of a reality show, filmed on hovering cameras that surround him. Odd detail, his hair was individually laminated so that, with an electrical charge, it stood in a cloud of spikes. One of his best friends is a scientist who delights in hedonism and social experimentation (I remember one of his chemical formulas turned out to be off by a few molecules and resulted in an orgy). His friend, at one point, was dressed as a plague victim, complete with fake bubos (I remember because this book introduced me to the word). Sex was referred to as "linking" with the penis sometimes referred to as one's "link".

Somehow, the main character winds up on a deserted island with the female love interest, who might have been some sort of reporter. He sustains an injury (a head injury, I think?) and I remember when he wakes up, she proudly says she took the maggots out of the wound whereupon he informs her that they're bioengineered to help him heal. He recovers some of them. I think they cannibalize one of his cameras for parts (I want to say that this was where we get the reveal that his nunchaku had a holdout weapon built into them essentially allowing each rod to act as a one-shot shotgun) and somehow wind up meeting up with an old man who's some sort of famous philosopher or economist. I remember there was an anecdote calling back to a classic piece of literature where this man found he could not look at an item without subconsciously calculating its value. The man was in exile, I think, although I don't remember if it was self-imposed or imposed upon him.

I don't remember exactly how it ends. The scientist friend (I think killed off in the same incident that resulted in the wound in the second paragraph) was involved in something hinky involving his drugs and the government. The main character matured (I want to say that he'd had puberty artificially prevented, and the accident resulted in him being off of his meds long enough to hit puberty) and becomes a man with all of the responsibilities involved. And I think he did wind up with the girl.

I remember this book was one of my favorites as a kid, but I can't quite recall the name. I keep wanting to say that the author is Bruce Schneier, but I can't find anything he's written that matches up.

The name suddenly came to me. The Artificial Kid by Bruce Sterling, released in 1980 (older than I'd thought). 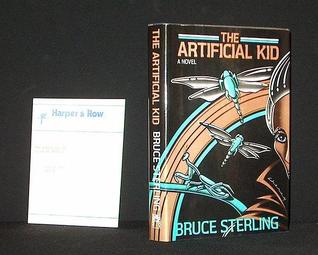 The entertainment industry rules on Reverie, a world founded by Moses Moses as an experiment in corporate-controlled equality. Instead, the experiment has caused Reverie to mutate into a landscape of decadence & class division. Miles above the surface, the ultrawealthy live in orbital homes, watching surface citizens' home-produced videos of sex & extreme violence. The title character, Arti, is the most popular Combat Artist. These futuristic mirrors of professional wrestlers or American Gladiators confront each other in superheroesque battles (altho the Combat Artists' contests are real) within a complex system of honor, ritual & conduct. Arti has reached the height of his fame--equally loved by fans & friends, despised by competitors. However, he's not entirely who he seems to be. When the planetary founder mysteriously returns, The Artificial Kid finds himself embroiled in a power struggle that's not ready for prime time. Bruce Sterling, best known for his nonfiction work, The Hacker Crackdown, & the cyberthriller, Islands in the Net, presents a seminal, vivid & turbulent future. The Artificial Kid is a work of satirical social commentary with the breakneck pace of a Hong Kong action film.

The reviews mention the nunchaku and the love interest, St. Anne Twiceborn.

17
Sci-fi story where all 'citizens' had shares in a global company
4
Cyber-punk style book, protagonist uses nunchucks and has nanites/bugs that heal

10
Children's Book Involving Witches, Flying Cars, and a Mysterious man who sacrifices himself for the protagonist
4
Science fiction book about an alien boy with two hearts
7
Looking for surrealist/ridicule book about a boy with a wingsuit
7
80s-90s Book (part of a series?) About Teenager Who Fights Greek Monsters
3
Paperback book, read in the 1990s, involving a man's son playing a too-good pirate video game with friends who disappear