Does a Sliders episode bring them to The Lost World: Jurassic Park?

In Sliders season 4 episode 14, "Mother and Child", they run into a building that looks exactly (as far as I can tell) like the visitor's center in The Lost World: Jurassic Park.

Does anybody know for sure if it's the same set?

In a word, yes. Parts of the episode were filmed on a backlot where the InGen Facility and Workers Village sets hadn't yet been stripped. The podcast "Jurassic Mysteries" (Episode 10) mentions some of the features that can be seen in the episode (transcribed below).

Operations building external and internal shots in first 27 seconds of episode
Emerge from the helipad end of operations building and there's no tree beside building
Set still has mould on it!
Doors have been removed. I wonder if they were kept by someone in production
Because roof curves up from front windows we can see large glass windows above the concrete wall the Mural was painted on.
They turn left when entering and head to window on unused end of lobby. I'd always thought they were at the end of the building looking out at the hill beside the building. But it's the lobby wall they're looking through. This is where nick stood shining light off into space after looking at Mural.
Note Comms room glass wall and door still in place behind them. So we still don't see the unused area of the building.
Room is still full of vines.
Giant tumbleweeds litter the lobby.
Mouldy blinds over windows
Hallway runs full length of operations building. There's a room and a door between Comms centre and rear helipad door
Centre wall where mural was is curved
Rear hallway has floor to ceiling windows running along it also. Would be stunning during its operation. Barred windows on roof? Same bars seen earlier above lobby. There's a walkway leaving building and going up a hill. Fire escape? Path to another structure? Note no perimeter fence.

They also did an hour long teardown of the episode here.

Eagle-eyed viewers will spot some boxes and crates stamped with the InGen logo. 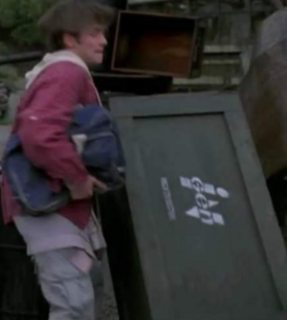 Not the answer you're looking for? Browse other questions tagged jurassic-park sliders the-lost-world-jurassic-park or ask your own question.

27
In the book "Jurassic Park" does the Lysine Contingency actually get explained?
16
Who killed the crew of the Venture in "The Lost World"?
56
Was the T-Rex the same one?
25
Are all of the Jurassic Park films canon?
7
How Dangerous is Jurassic Park/World?
8
What happened to the dinosaurs living on Isla Sorna?
16
Did Hammond not pay Nedry well?
3
Did the Jurassic World park make any other hybrids?
24
Does Ian Malcolm know what awaits them at Jurassic Park?